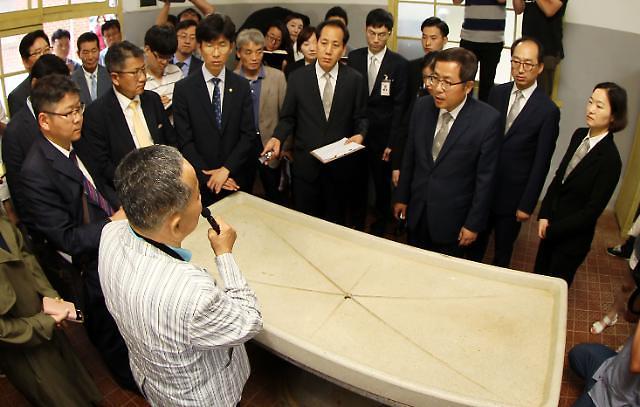 A file picture showing an onsite court inspection of the site for forced abortions in Sorokdo. [Yonhap News Photo]

For nearly four decades from the 1950s, forced vasectomies and abortions were performed on leprosy patients on Sorokdo Island on the false belief that the disease was hereditary. In 2011, the patients unraveled stories of their dark past which they had to suffer, suing the government for violating human rights.

Their legal battle came to an end Wednesday when the Supreme Court ordered the government to pay 30 million won (26,200 US dollars ) to nine male victims and 40 million won to 10 women each. It was the top court's first leprosy-related ruling. Five other cases filed by some 500 patients are pending.

The government insisted its operation was conducted on consent from the patients, but the court ruled that their decision was based on "prejudice, discrimination and poor social, educational and economic conditions". "The government has violated human rights of the patients by restricting their rights to give birth and form a happy family." the court said in a statement.

"It's glad to hear that the judiciary has finally decided to wipe the tears off the Hansen patients," said Park Youg-lip, who heads a legal group supporting the patients.

The Sorokdo shelter was built in 1916 during Japan's 1910-1945 colonial rule over the Korean peninsula, as a concentration camp for leprosy patients. In 1945, the South Korean government took over the facility and started performing vasectomies and abortions under a prejudice that the disease can be contagious and could be passed on to descendants.

Government attorneys have said that surgeries had to be done because many patients were not economically sustainable to support their children who were either born in secrecy or before their parents came to the island.

The children had been kept in orphanages allegedly to prevent them from being infected with the disease and allowed to see their parents only once a month.

Under a revised act, Sorokdo has been transformed into a community center with a modern hospital, farm land and welfare facilities with the patients granted subsidies every month in living and medical expenses regardless of their income.