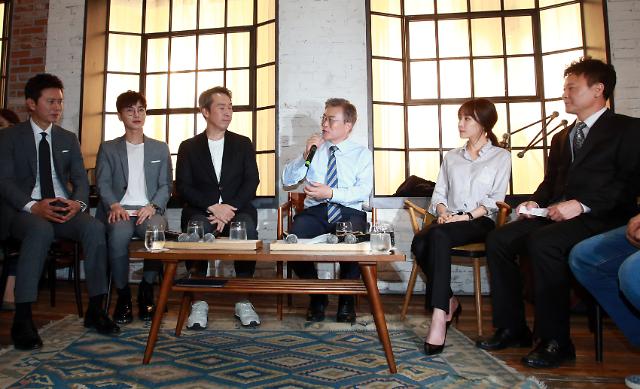 ​
Moon Jae-in, favored to become South Korea's next president, promised to watch a movie or a concert once a month if he wins next week's election, envisaging his image of loving popular arts and culture.

The regular presence of a national leader mingling with citizens in theaters and concert halls will contribute much to the development of popular arts and culture, Moon said during his visit to a music town run by South Korea's leading talent agency SM Entertainment.

"I will be a president who loves popular culture and arts, supports politics, and plays a role as a fan," he said, suggesting he would watch a movie or an entertainment show once a month if he becomes South Korea's next president.

"I will surely be the president who goes to see popular arts. To do so, a new public culture should be established to accept and understand such presidential activities," he added.

Already, the former human right lawyer has promised to improve communication with the public by relocating the "Blue House", a complex of residence and office buildings used by South Korea's head of state and aides, and transforming it into a public park.

Moon insists South Korean leaders have long been isolated and secluded in the presidential compound. "It is an expression of my determination to end the era of non-communication and open a democratic era of communicating and mingling with the people," he said earlier.