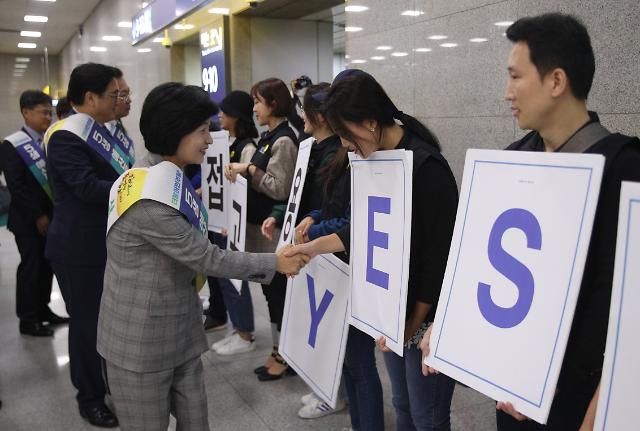 "Labor and management continued their negotiations into late Thursday, which broke down as the company didn't come up with an improved proposal," a union official said. "Unionized workers started the walkout from 4 a.m."

It marks the first industrial action by KTX cabin crewmembers in 11 years. The trade union of the KORAIL subsidiary includes nearly 400 cabin attendants from KTX and Saemaeul express trains.

Unionized workers were slated to hold a protest rally in front of Seoul Station in the downtown area of the South Korean capital.

The union demands a 5-percent increase in pay, the abolition of a merit-based pay system and improvements in other working conditions.

KORAIL Tourism Development insists that it can't accept the pay hike demand because KORAIL has approved a mere 1.2-percent increase for its personnel costs. The company has also spurned other demands.

The two-day strike by KTX attendants is not expected to affect the operation of high-speed trains as South Korea is on the cusp of a long Chuseok holiday, but the company said it will mobilize about 230 replacement and non-union workers to ward off any inconvenience.

The 10-day Chuseok holiday begins on Saturday, with Chuseok falling on Wednesday. The Korean autumn harvest celebration is similar to Thanksgiving in America, with people reuniting with family and friends.