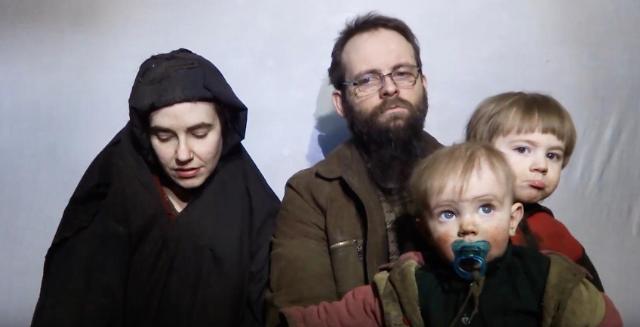 The North American couple was kidnapped while they were traveling through Afghanistan as tourists. Coleman was pregnant when she was kidnapped. The couple had three children during the captivity. [Courtesy of Taliban Media / Youtube]


A North American family who was held hostage by Taliban for five years has been freed. The Pakistani military is responsible for the rescue.

Caitlan Coleman, a 31-year-old American woman, and her husband Joshua Boyle, a 33-year-old Canadian national, were kidnapped in 2012 while they were traveling in Afganistan as tourists. Coleman was pregnant when the couple got kidnapped. She gave birth during captivity and had two more children.

The U.S. Intelligence agencies have been tracking the family down. They alerted the Pakistani army and two nations held co-op with one mission to free the Boyle family.

Boyle's parents, Patrick and Linda Boyle, got to hear their son's voice for the first time in five years. They released a video statement through the Toronto Star newspaper. In the video, Boyle's mother Linda said "It was amazing" to finally hear her son's voice. She also expressed her delight to meet her three grandchildren.

However, Joshua Boyle refused to board a plane to the U.S. after the rescue, Reuters reported. The reason may be that Boyle's former ties to Islamic terrorist Omar Khadr through his previous marriage.

However, Canada Foreign Affairs Minister Crystia Freeland expressed that the Canadian government is not interested in persecuting Boyle for his former ties but is only focusing on the safety of the family. In an interview with BBC, Freeland said, "Joshua, Caitlan, their children and the Boyle and Coleman families have endured a horrible ordeal over the past five years. We stand ready to support them as they begin their healing journey."

The Taliban-affiliated group that is responsible for the kidnap is the Haqqani network. The kidnappers released videos of the couple during the captivity to demand money in exchange for the couple's freedom. In the last video that was "proof of life", Coleman briefly mentioned being "defiled" by the Taliban group and Boyle explained that the kidnappers would only release them for "money, power, and friends". During the rescue operations, some insurgents were killed and many arrested.