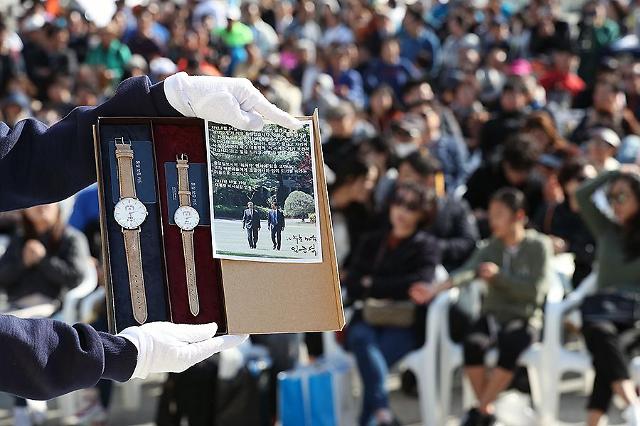 A charity auction organizer holds up a set of presidential watches for an auction at a charity event on Sunday. [Yonhap Photo]


Donated items used by South Korean President Moon Jae-in and his wife sparked fierce competition among buyers at a charity auction, reflecting the popularity of the presidential couple know for their frugal lifestyle.

Most popular among the items put up at "2017 Weaja Charity Flea Market", a charity marketplace held at a public park Sunday, was a set of presidential wrist watches set donated by Moon's chief secretary, Im Jong-seok, that included the president's autograph and a presidential emblem.

In fierce bidding, a middle-aged man got it for 4.2 million won (3,709 US dollars), becoming the envy of many South Koreans. The president's watches for men and women were designed as gifts to selected people, but they have become one of the most wanted items.

Moon's necktie fetched 300,000 won. Items donated by First Lady Kim Jung-sook were also popular. A set of jacket and pants which Kim wore for overseas trips was sold for 300,000 won, although the same one could be bought at a TV home shopping for 90,000 won. A gold plated bracelet cherished by the First Lady for more than 20 years was sold for 2.2 million won.