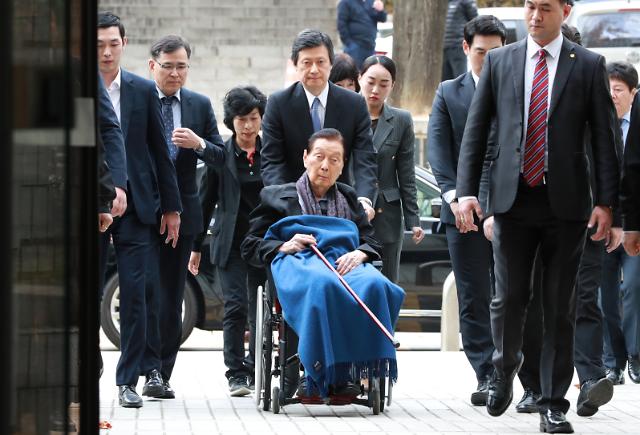 Prosecutors demanded a 10-year prison term and 300 billion won (US$268 million) fine for Lotte Group founder Shin Kyuk-ho on Wednesday for embezzlement, breach of trust and other charges.

The 95-year-old Shin was indicted in October for a series of management irregularities, including ordering Lotte to pay 50 billion won in wages to family members who had never worked for the company.

He was also accused of transferring his shares in Japan-based Lotte Holdings to family members at face value to help the recipients evade about 70 billion won in gift taxes.

Last week, prosecutors also demanded 10 years in prison for his son and Lotte Group Chairman Shin Dong-bin; a five-year term for his other son Shin Dong-joo; and seven years each for his daughter Shin Young-ja and his mistress Seo Mi-kyung over similar charges.

These irregularities came to light during a fight between Shin's two sons for control of the group.