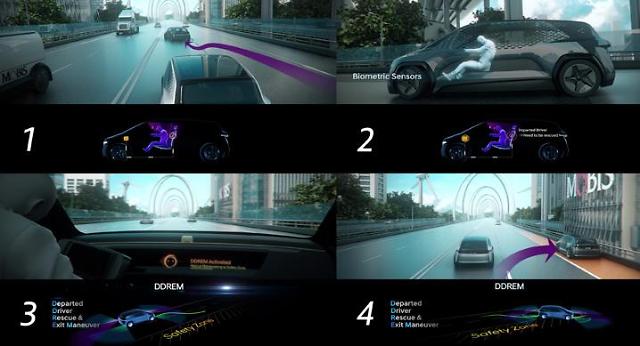 SEOUL, Dec. 21 (Aju News) -- Drowsy driving was a hot social issue in South Korea this year as bus and truck drivers dozed off, causing a series of fatal accidents on expressways that killed many innocent people.

According to police data, about 120 people die every year in South Korea because of drowsy driving. There are many headsets in the market which alert drivers when they doze off, but many do not know and some refuse to use them because they are bulky and inconvenient.

Hyundai Mobis, a unit of South Korea's  Hyundai auto group has developed a new technology to prevent drowsy driving. The new system would be showcased at the Consumer Electronics Show, the world's largest electronics show to be held in Las Vegas next month.

The company said Thursday through its news blog that its new technology called "Departed Driver Rescue & Exit Maneuver" (DDREM)" will intervene to take control of a car when its driver is drowsy driving or in an emergency situation.

"DDREM is an autonomous driving technology for the health and safety of passengers," a Hyundai Mobis official said, adding it can check the status of drivers by reading their face.

Important factors including the direction of eyes and the frequency of blinking are calculated, based on a database of analyzed accident data, and the system can take control of the car, moving to a safe zone. Hyundai Mobis aims to acquire related technologies by 2021.