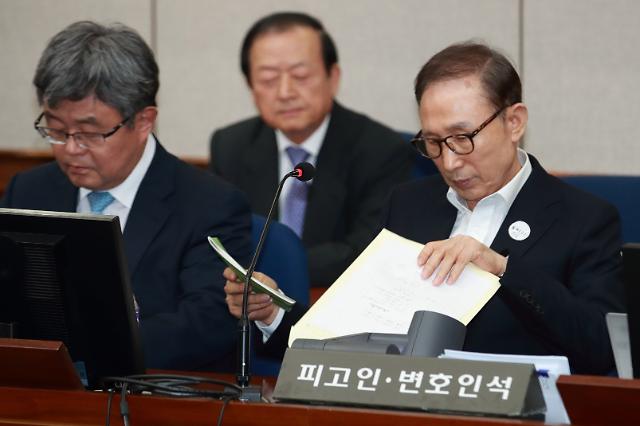 
SEOUL -- South Korea's jailed ex-president Lee Myung-bak asserted his innocence Wednesday as he appeared in court for his first hearing on corruption, abuse of power, embezzlement and other charges.

"I believe that the court will examine the credibility of unreasonable evidence," Lee said in his hand-written statement when judged opened the hearing at the Seoul Central District Court. It marked Lee's first public appearance since he was arrested on March 22.

"Hopefully, the procedure and results of this trial will be an opportunity to show the judicial justice of our country to the people and the international community," the ex-president said. Lawyers said he has suffered from diabetes and insomnia.

Lee, who served as president from 2008 to early 2013, was accused of taking bribes totaling about 11.1 billion won ($10.4 million). He became the country's fourth national leader to stand trial. His conservative successor, Park Geun-hye, received a 24-year jail sentence for her role in a massive corruption scandal.

Other charges include tax evasion, breach of trust and abuse of power. He was also accused of shipping thousands of documents out of the presidential office.

Lee has denied any wrongdoing, describing a probe by prosecutors as political retaliation for the death of his predecessor, Roh Moo-hyun, who threw himself off a mountain cliff in 2009 following a humiliating probe into alleged corruption involving his family.

At the center of debate has been DAS, an auto parts supplier for Hyundai Motor. Prosecutors said Lee is the real owner of DAS and used it to create a slush fund, but the ex-president insisted the company is owned by his brother.

Lee was indicted for embezzling about 34.9 billion won from DAS for his political campaign and personal life and taking bribes from businessmen in return for favors. He was accused of receiving an illegal payment of some 700 million won from South Korea's spy agency. Samsung Electronics allegedly provided $5.85 million to support a lawsuit in the United States on behalf of DAS.

"It was shocking and insulting that I received a bribe from Samsung," Lee said at Wednesday's hearing, reiterating his earlier argument that he had never accepted any illegal bribes or political donations during his five-year tenure