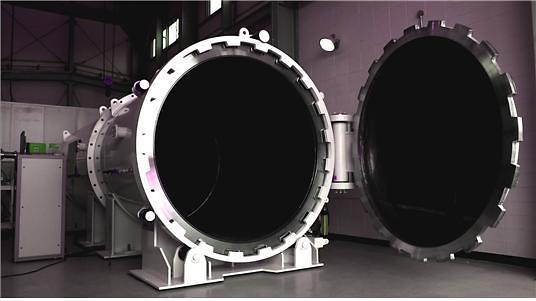 
SEOUL -- A South Korean railroad research institute has unveiled the prototype of a hyperloop vacuum tube that could be used in a revolutionary bullet train project to transport passengers and cargo in special capsules through tubes with low pressure.

Reduced-pressure tubes in which pressurized capsules ride on an air cushion driven by linear induction motors and air compressors are essential in the development of hyperloop technology.

The Korea Railroad Research Institute said it has developed the prototype of hyperloop vacuum tubes, a structure that keeps airtightness by lowering its inside to less than 1/1,000 atmospheres to minimize air resistance of an encapsulated vehicle.

The vacuum tube is made of pressure steel with a length of 10 meters, an inner diameter of 2,640 mm and a thickness of 23 mm, the institute said, said the prototype is an actual scale capable of accommodating a Hyperloop capsule vehicle inside.


Hyperloop technology has been open-sourced by Elon Reeve Musk, a South African-born Canadian-American business magnate and inventor. In 2013, SpaceX founder Musk envisioned a system consisting of a solar powered tube and levitating pods that could theoretically shoot passengers between cities at speeds close to the speed of sound.

In 2016, Hyperloop One, a registered SpaceX trademark, carried out its first demonstration of the early stages of the development of the technology. Virgin Hyperloop One is an American company working to commercialize Hyperloop.

The institute claimed that pressure in its tube was 10-5 atmospheres, which is superior to the 10-4 atmospheres of Virgin Hyperloop One. In its lab in Osong, about 108 km (67 miles) south of Seoul, the institute has its prototype capable of lifting and propelling a 30-ton capsule vehicle up to 550 km per hour. 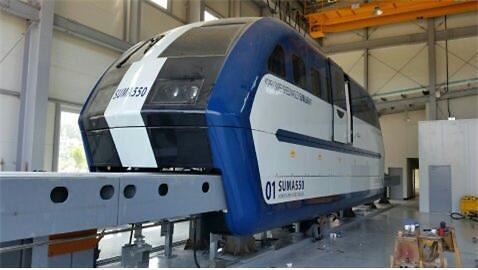 
"By utilizing hyperloop technology developed here, we will lead the future transportation revolution that connects not only the Korean peninsula country but also Eurasian continents at a high speed," KRRI President Na Hee-seung said in a statement.

In 2016, a research team at the Ulsan National Institute of Science and Technology (UNIST) jumped into the race to develop hyperloop technology in a project which is seen as quite similar to Hyperloop One's pneumatic tube transportation system incorporating reduced-pressure tubes in which pressurized capsules ride on an air cushion driven by linear induction motors and air compressors.