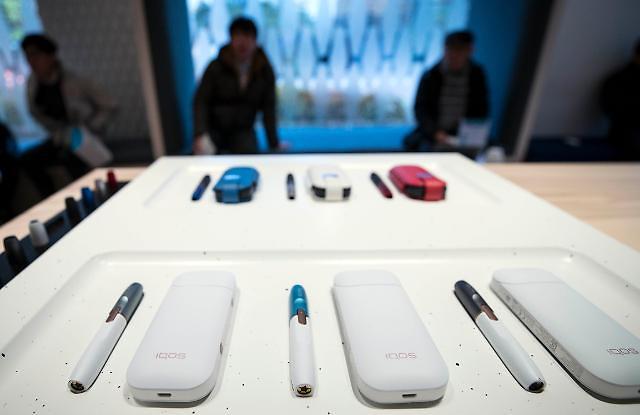 The popularity of HNB tobacco products has surged since they were first introduced in South Korea in May last year, and about 10 percent of the smoking population has ditched ordinary cigarettes to use HNB products, according to KT&G, a state-owned tobacco company.

Turncoats chose HNB products because of their healthier image. They also think HNB products do not emit a disturbing scent.

The Ministry of Food and Drug Safety unveiled test results Thursday and said that by analyzing HNB products, carcinogenic substances such as formaldehyde and benzene were found. Also, the level of harmful substances such as nicotine found from the emission of HNB products was similar to that of conventional cigarettes.

"Because the nicotine itself is an addictive substance, HNB products cannot provide help to those who wish to quit smoking," the ministry said in a statement, warning  HNB products could contain more harmful substance because some of them had a higher level of tar content than ordinary cigarettes.

"There is no reason to think that e-cigarettes are less harmful than conventional cigarettes," the ministry said. The test results showed a very low level of harmful substances such as acetaldehyde and acrolein in the fumes of HNB products, compared to ordinary cigarettes. There was no carbon monoxide and benzopyrene found.

Unlike smoking a cigarette, which is an act of inhaling fumes created by burning tobacco and wrapping paper, smoking HNB products is inhaling vaporized nicotine and other substances when a tobacco stick is heated up to 350 degrees Celsius (662 degrees Fahrenheit) using dedicated electronic heating devices.

Because of the unique method of heating, not burning, tobacco sticks, some tobacco companies claim HNB products are less harmful. However, test results from around the world show different results.

The tobacco company refuted the ministry's claim that HNB has a higher level of tar content. "It was not right for the drug ministry to emphasize negative points about HNB products because past test results and scientific evidence showed the relativeness between the lowered level of harmful substances and lowered health risks."

The company criticized the way the ministry used to calculate tar content in HNB products, saying the fumes of a cigarette and the vapor of an HNB product are different and should be tested in a different way.