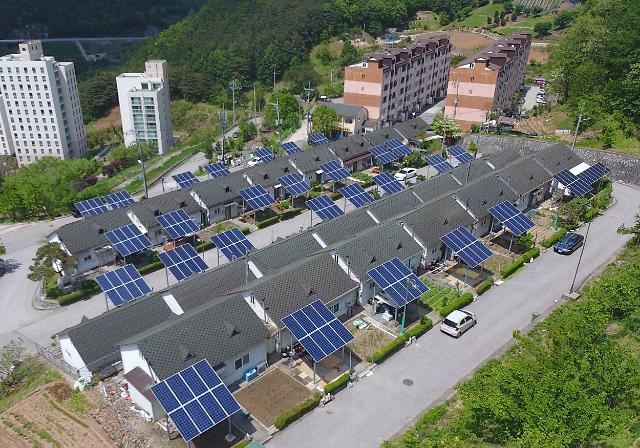 
SEOUL -- Helped by active government supports and investments, renewable energy is more widely used than before in South Korea. Government data showed renewable energy supply more than doubled to 1185.5 megawatts in the first half of the year from 469.2 megawatts a year ago.

Meanwhile, the utilization rate of nuclear power plants fell from 75.2 percent in the first quarter of last year to an average of 56 percent this year due to some nuclear reactors being temporarily shut down for maintenance and safety inspections.

Government officials predict the trend is expected to gain speed as President Moon Jae-in vowed to increase the share of renewable energy up to 20 percent of the country's total electricity output by 2030.

Last week, KHNP agreed to close the Wolsong-1 nuclear reactor in Gyeongju, about 280 kilometers (173 miles) southeast of Seoul, and scrapped plans to build four new plants. South Korea has 24 reactors in operation, which meet one-third of the country's power needs, but Moon promised to inject about 110 trillion won into renewable energy by 2030.

A survey of 1,009 people, published by the Hyundai Research Institute, found that 84.6 percent supported Moon's new energy policy. South Korea, which has almost no reserves of fossil fuels on its territory, has pushed for a nuclear energy program. However, public concerns over their safety grew following Japan's 2011 nuclear meltdown in Fukushima.
South Korea has tried to export its nuclear technology and home-made reactors since it secured a $20 billion contract in 2009 to build four reactors in the United Arab Emirates. Moon has promised to actively support exports of home-made reactors.
In December last year, Korea Electric Power Corp. (KEPCO), which produces reactors, was selected as a preferred bidder for a nuclear power project involving Japan's Toshiba to build reactors in Britain.

South Korea is now locked in the race with France, China and Russia to win a Saudi contract on building two reactors. As the world's biggest crude exporter, Saudi Arabia seeks to diversify energy supplies and reduce its dependence on hydrocarbons. Construction will start next year on two plants.
This story was contributed by Jazin Wee, an editorial assistant.