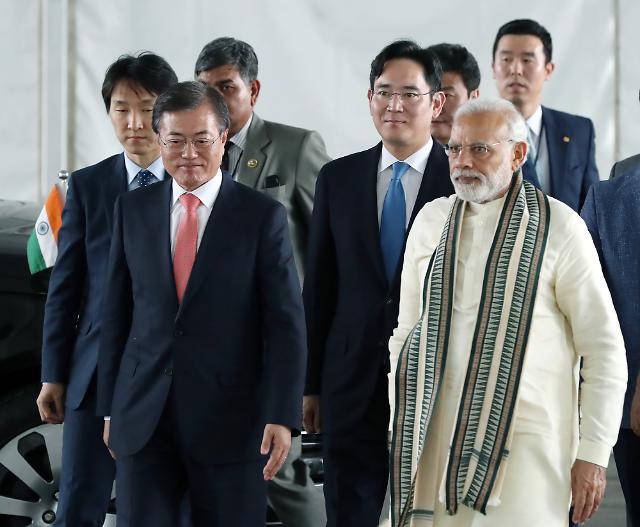 
NODIA, India -- With the unusual blessing of President Moon Jae-in, Samsung Electronics opened the world's largest smartphone factory in India in an event that marked the official comeback of Jay Y. Lee as the virtual head of South Korea's largest conglomerate in 17 months.

"The Noida plant has now become the largest smartphone production facility of Samsung Electronics in South Korea and outside," Moon said in his opening speech. His trip to Noida came one day after he arrived in New Delhi for a four-day state visit.

"I hope smartphones produced at the Noida facility will be exported to third countries in the Middle East and Africa, thus enhancing the fruits of economic cooperation between the two countries," Moon said, promising to support the plant as a symbol of cooperation between India and South Korea.

After a tape-cutting ceremony, Lee guided the two leaders through the plant which represents Samsung's campaign to maintain its leadership in the global smartphone market.

Shortly after his arrival at the plant, Moon had a five-minute private meeting with Lee to offer encouragement, according to the presidential office. "Thank you for the big role that Samsung has played in helping India sustain its rapid economic growth, and I hope Samsung will invest more at home and create more jobs," Moon was quoted as saying.

It was their first official encounter since Lee, 50, was arrested in February last year for bribing South Korea's ousted ex-president Park Geun-hye who received a 24-year jail sentence as a key culprit behind a corruption scandal that revealed deep-rooted collusive ties between businessmen and politicians.

The only son of Samsung's ailing group head Lee Kun-hee was given a five-year prison sentence last year, but he was released in February this year after a high court suspended his sentence to ease widespread jitters in South Korea's business community about Samsung's global competitiveness.

Lee has controlled group management from behind since his father was hospitalized in May 2014 after being hit by a stroke. But he contained public activity after he was released from detention.