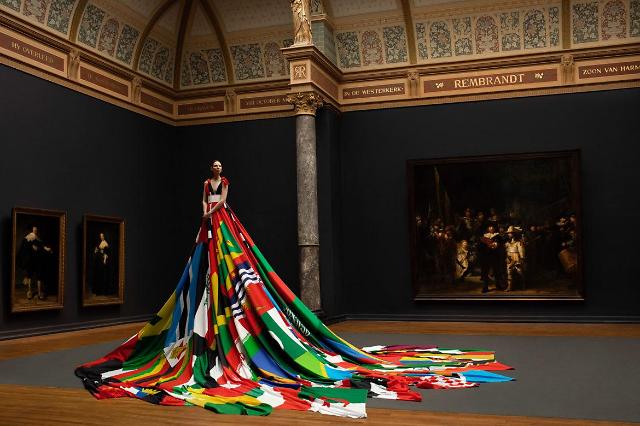 
SEOUL -- The Amsterdam Rainbow Dress symbolizing the persecution of lesbian, gay, bisexual and transgender (LGBT) people will be shown off during an annual Queer festival in Seoul this week for the first time in Asia.

Along with the dress, made from the national flags of countries which persecute LGBT people, a giant 50-meter-long rainbow flag will be used at the festival Saturday on a public plaza outside the Seoul city hall, organizers said.

Last year, tens of thousands of LGBT people staged a gay pride parade after rallying on the plaza, calling for the better social care of South Korea's sexual minority community. This year's parade will be led by a motorbike team of "Queer Riders", the organizing committee said on its website, urging participants to show "our pride as gender minorities in the middle of Seoul!"

Access to the festival will be partially controlled to prevent clashes with "phobic" groups, the committee said as some conservative Christian and other groups called for protests in nearby places.

The Queer parade in Seoul has attracted more participants and attention since it began in 2000. Rights groups and some foreign embassies have pledged support, but controversy is unavoidable as many conservative people oppose it for spreading wrong ideas about sex.

A petition, posted on South Korea's official presidential website on June 14 to oppose the festival, has attracted more than 213,000 supporters as of Thursday. "We do not deny, dislike or discriminate against homosexuals. We do not want to see their abominable events in the square where we should rest and enjoy," read the petition.