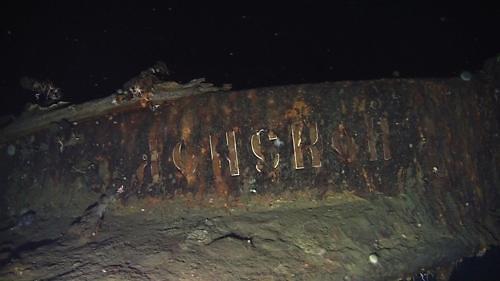 
SEOUL -- A South Korean company claimed Tuesday to have discovered Dmitrii Donskoi, a warship of Russia's Imperial Navy, which sank near a remote island east of the Korean peninsula in 1905 during a Russo-Japanse naval battle.

In waters 1.3 kilometers off the Jeodong port in Ulleungdo, a South Korean island located between the Korean peninsula and Japan, the sunken ship was found Sunday at a depth of 434 meters, according to the Shinil Group, which has construction and steel units.

Shinil was among many treasure hunters seeking to salvage a Russian ship that reportedly carried riches for financing the battle and other czarist treasures. The company has tried to lure investors with claims that Dmitrii Donskoi sank
with 200 tons of gold ingots and coins aboard.

In a search using two manned submersibles equipped with high-resolution cameras, Shinil said the sunken ship was found with "DONSKOII" written on its stern, along with cannons, guns and wooden decks. Shinil did not say if gold ingots were discovered.

The bow stood at a depth of 430 meters with the stern heading to the water at 380m, the company said, adding the upper deck, made of wood, was almost untouched and the armor on the side of the hull was well preserved. However, the hull was severely damaged and the stern almost broken, it said.

Dmitrii Donskoi was a semi-armored frigate designed as a commerce raider. The iron-hulled ship was 93.4 meters long overall and had two three-cylinder compound steam engines driving a single propeller shaft.

En route to Russia's far eastern port of Vladivostok, the ship was badly damaged and her captain ordered the crew ashore off Ulleung Island and had Dmitrii Donskoi scuttled offshore.