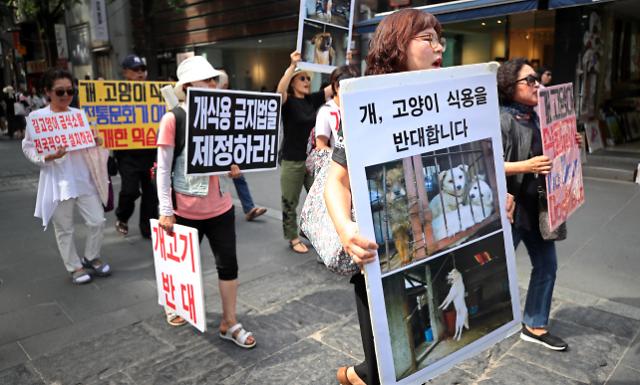 A file picture shows activists carrying placards that called for a ban on eating dogs and cats.[Yonhap News Photo]


SEOUL -- Seven dog farm operators face indictment for raising more than 200 dogs for table use in an unhygienic way in iron cages in a police crackdown following ceaseless protests by animal rights activists against dog meat consumption, a controversial social issue which has caused international criticism and catcalls.

Despite international criticism and growing public awareness of animal rights at home, many South Koreans do not oppose the distribution of dog meat through legalized channels. President Moon Jae-in has been under pressure from activists to impose a complete ban on butchering dogs for table use.

Police said Tuesday that seven people were not detained but would face indictment by prosecutors on charges of abusing animals and feeding dogs with food waste in Hanam, one of Seoul's satellite cities. They were accused of housing 219 dogs in iron cages in an unhygienic and inhuman environment.

Eating dogs have settled as a Korean tradition for ages, but the population of eating dog meat has dropped dramatically in recent years thanks to an active campaign by animal lovers. Dog meat lovers and restaurants claim that eating dog is nothing different from eating beef, pork, or horse meat while activists say dogs are bred in meat farms and slaughtered in a cruel and unhygienic way.

However, Choi Jae-kwan, a senior presidential aide, voiced caution last week in response to a public petition. "We must also consider the livelihoods of people engaged in the related business," he said, citing a survey conducted by Realmeter, a Seoul-based pollster, which found that 51.5 percent of respondents opposed a complete ban on dog meat.