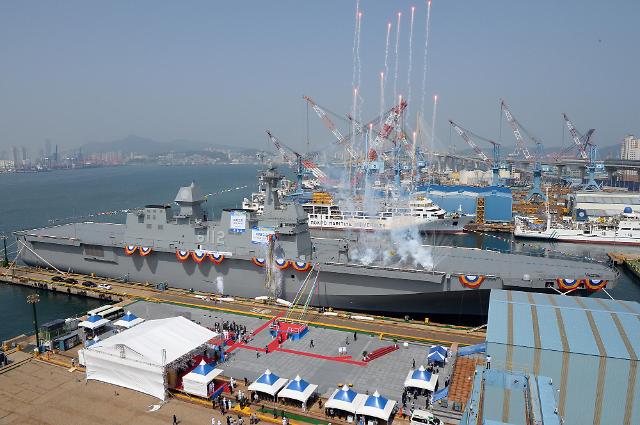 
SEOUL -- South Korea's navy will kick off a research project to see if its new landing ship is capable of loading a variant of American stealth multirole fighters on its upper deck, citing similar moves by Japan and other countries.

F-35B, the short take-off and vertical landing (STOVL) variant of the F-35A new generation stealth fighter created by Lockheed Martin, can takeoff vertically up into the air without the need of a runway. Because of its characteristics, the United States and other countries like Australia are modifying their existing landing ships to carry "hopper" jets.

The South Korean navy said it would open a bid to research and analyze what kind of modifications are needed to make Marado, a new Dokdo-class landing ship, capable of carrying F-35Bs. The 14,500-ton Marado ship, which will be deployed in 2020, is about 200 meters (656 feet) long to carry 720 marines along with tanks, armored personnel carriers (APCs) and hovercrafts in the lower deck and helicopters on the top deck.

Through its research, the navy seeks to find if there are any other countries which have succeeded in loading a landing ship with F-35B, the list of modifications needed for Marado and how much the modification process would cost. The project will end on December 15 this year.

South Korea has decided to buy 40 F-35As. By having F-35B jets aboard Marado, the landing ship's range of operation will be greatly increased. The existing Dokdo ship cannot withstand high temperatures caused by fighter jets.