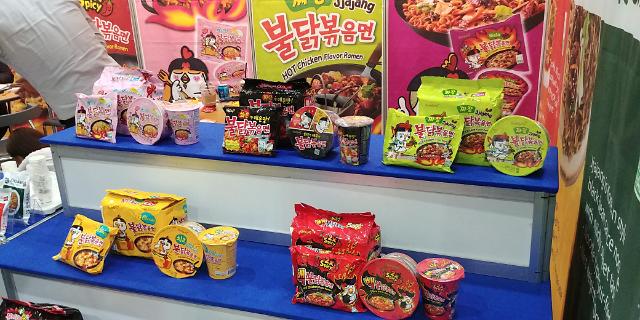 
SEOUL --  At home, Samyang Foods was credited with introducing the first instant noodles in South Korea in 1963 when its founder, Jun Jung-yun, brought machines from Japan. The alien product based on chicken soup made a sensational hit, becoming ordinary food for ordinary folks, and helped many people overcome a food shortage.

The producer of instant noodles, known as ramyeon in Korean and ramen in Japanese, has lost its dominant status at home because of fierce competition, but it is regaining its brand recognition abroad especially among Muslim customers in Southeast Asia with a brand of very spicy chicken flavored noodles, which are notorious for their infernal spiciness.

An aggressive marketing targeting high school students has been launched with various promotional events. "We visit schools and carry out challenges. Students compete to become the best in withstanding the hot flavor of our noodles," she said, describing their reaction as explosive.

Samyang is not complacent, saying it would broaden its brand recognition with a new lineup of halal-certified menus such as smaller instant noodle packages with flavors of Kimchi and Tteokbokki, a rice cake broiled in sweet chili sauce.

Samyang's success prompted other food companies to follow suit with certified halal menus. "The number of companies which apply for halal certification has almost doubled since 2015," said Kang Na-yeon, an assistant manager at the Korea Muslim Federation, which provides halal certification.

In 2015, South Korea has signed a memorandum of understanding with the United Arab Emirates to cooperate on the production and distribution of halal food. "Many businesses have shown interest in going abroad with halal food," Kang said. The Seoul government has promised to actively support companies trying to enter the global halal market estimated at about $2 trillion.

Exports of South Korean instant noodles rose 32 percent on-year to 346.4 million US dollars in 2017, according to the Ministry of Agriculture, Food and Rural Affairs. Some 80 percent of instant noodles in the world is consumed in the Asia Pacific region. A survey conducted by the Korea Small Business Institute showed that Malaysia is the top destination for South Korean firms exporting halal food, followed by Indonesia.

In Malaysia this year, Shinsegae Food, a subsidiary of South Korean retail giant Shinsegae, unveiled a halal certified instant noodle brand called "Daebak", which means jackpot or big success in Korean. Daebak comes in two flavors -- seasoned fried chicken and Kimchi, a South Korean traditional cabbage pickled in a sauce made with red chili pepper and garlic. Both have special liquid seasonings to add unique flavors. Daebak collected $1.4 million in revenue just for a month after it was released in Malaysia in April.