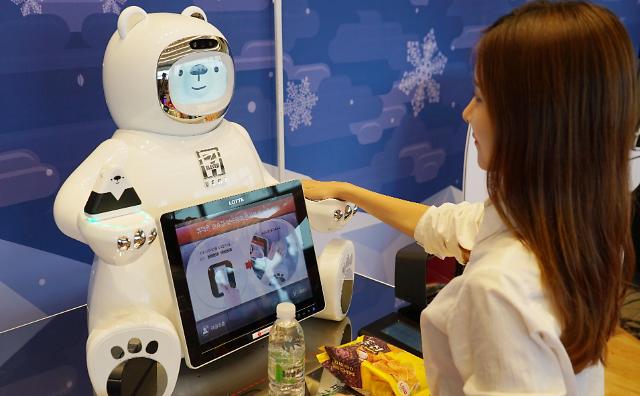 
SEOUL -- A Polar Bear-concept robot equipped with a palm vein scanner and artificial intelligence technology appeared at a smart convenience store in South Korea's 123-story high-rise landmark to give a new shopping experience to customers.

The robot called "Veny" is the brainchild of Lotte, the country's fifth largest conglomerate, which introduced palm vein patterns for biometric authentication for the first time in South Korea. Lotte controls Korea Seven, the operator of 7-Eleven outlets in South Korea.

Lotte has spearheaded a digital revolution in South Korea's distribution industry. A palm-vein authentication solution called "HandPay" was introduced at designated 7-Eleven outlets in Seoul last year. Lotte Card clients should store encrypted biometric data in advance but they need no cash or plastic card to shop at the 7-Eleven outlets equipped with palm vein scanners.

Veny was unveiled Tuesday at the 7-Eleven Signature store of the Lotte World Tower, a 123-story shopping and living tower complex in southern Seoul. Korea Seven CEO Jung Seung-in described Veny as the symbol of a digital revolution, saying the convenience store chain would introduce an unmanned shop through Veny.

"With the introduction of Veny, it became possible to provide hospitality services to regular customers. We wanted to create a warm and familiar futuristic store by adding value for communication and emotion," Jung said.

Yet, the store is not completely unmanned because a manager is required to display merchandise and clean it, but Veny can minimize manpower as it features various functions such as AI communication, face recognition, image and motion sensing, emotional expression, a payment solution and self-checking.

The key function is voice services for 1,000 situation scenarios such as product information and daily conversation. On consent from customers, Veny can detect and remember their face information and offer greetings when they come back. Using seven different 3D emotional expressions, it gives customers a sense of familiarity when making payments or various conversations.

The robot using image and motion sensors can detect the movement of customers, moving eyes according to their positions. When a customer comes into the store, it can look up and greet.

Payments can be made through HandPay, credit cards and transportation cards. Veny checks the overall function abnormality and informs the manager. Without a manager, customers can make an unattended settlement.

For safe and convenient financial transactions, financial regulators have urged credit card firms and financial institutions to introduce biometric authentication technologies which are effective in detecting any attempt to tamper with payment processes.