Hanwha to unveil AS21 Redback infantry fighting vehicle in Australia 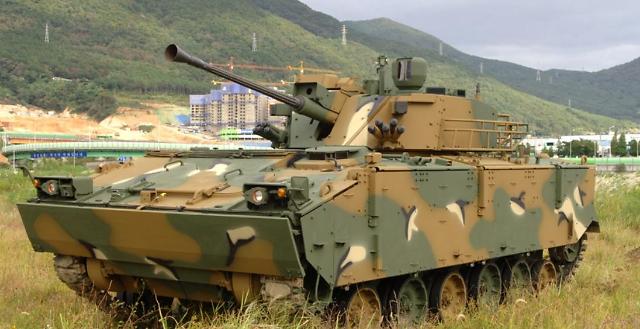 SEOUL -- Hanwha Defense Systems, a key defense contractor in South Korea, will showcase the prototype of its AS21 Redback infantry fighting vehicle for the first time at this week's defense fair in Australia.

The AS21 Redback is the advanced version of Hanwha's K21 and is designed for the Land 400 Phase 3 campaign to replace Australia's M113AS4 armored personnel carrier.

Hanwha said in a statement Tuesday that the prototype of the AS21 Redback would be unveiled at the Land Forces 2018 conference in Adelaide. "Land Forces is an important exhibition that will be a bridgehead for entering the Australian market," CEO Lee Sung-soo was quoted as saying.

Lee said his company would try to gain trust from Australian defense officials with "competitive products and solutions." Hanwha said the AS21 Redback would meet future warfare requirements with enhanced protection, firepower and performance.