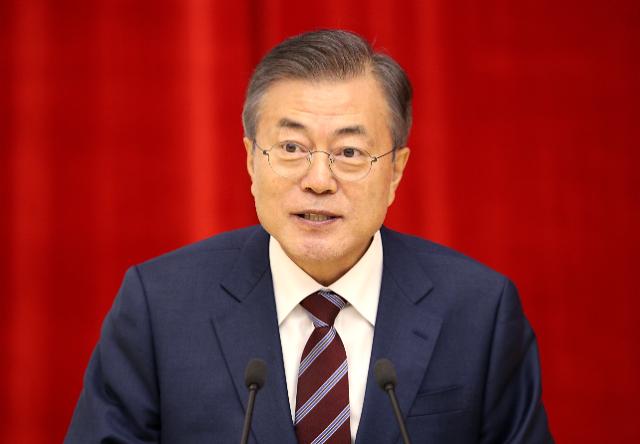 SEOUL -- South Korean President Moon Jae-in will have a special night out Wednesday to watch a mass acrobatic, dance and gymnastic performance, which was once listed in Guinness World Records as the largest event of its kind and involved tens of thousands of school children.

The one-hour performance titled "The Glorious Country" will slightly change its content to welcome Moon, his office said in Seoul, adding the South Korean leader would deliver a speech before some 150,000 people.

The extravaganza, which had used the name of Arirang, was suspended in 2014 for unknown reasons. After a five-year hiatus, North Korea resurrected it this year. The festival has been held at the May Day Stadium from September 9 to mark the 70th anniversary of North Korea's founding.

Traditionally, the festival has opened with the mass games framed for huge mosaic pictures created by tens of thousands of school children, each holding up colored cards in a card stunt, accompanied by complex and highly choreographed group routines performed by gymnasts and dancers.

It has been a crucial propaganda tool to eulogize the Kim dynasty, unfolding an epic story of how North Korea ended the history of distress and rose as a dignified nation. In 2007, the mass games were recognized by Guinness World Records as the largest gymnastic display with about 100,000 participants.

For his dinner on Wednesday, Moon picked a riverside seafood restaurant which has become a new tourist attraction in Pyongyang.

The Pyongyang Taedonggang Seafood Restaurant named by North Korean leader Kim Jong-un opened on July 30, with its indoor ponds teemed with delicious fishes like sturgeon, shellfish and turtles and the angling site on the first floor.

According to Pyongyang's state media, the restaurant depicting a floating boat has indoor ponds teemed with sturgeon, leather carp, salmon, rainbow trout and other delicious fish and the angling site on the first floor. The second and third floors are arranged with various forms of dining rooms and counters selling processed seafood,