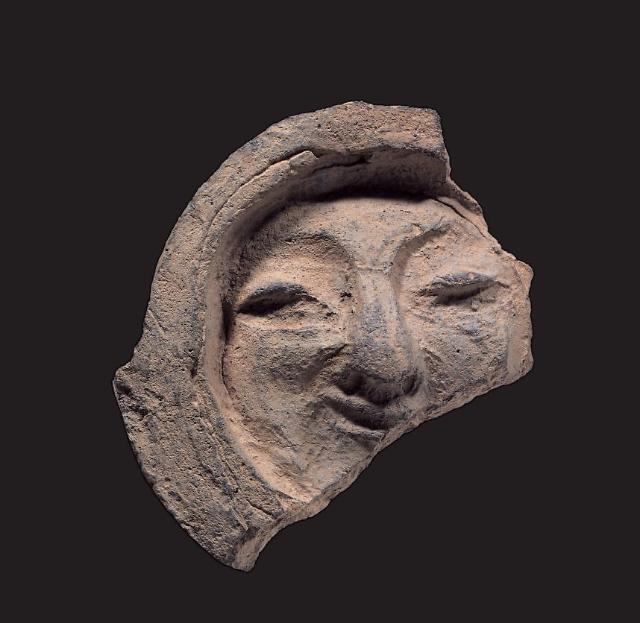 [Courtesy of the Cultural Heritage Administration]


SEOUL -- "The Smile of Silla", a broken 7th-century roof-end tile adorned with the delicate and smiling face of a woman, will be designated as a national treasure. It represents a page of history when the Korean peninsula was under Japan's harsh colonial rule.

The Cultural Heritage Administration, a state body, said Tuesday that the off-white tile used to decorate the eaves of a roof represents the excellent technology of the ancient Silla dynasty (57 BC-935 CE).

Unlike ordinary roof tiles which used a production frame, the Silla masterpiece was hand-made, the administration said in a statement. "Although the lower left part is missing, it shows the workmanship of skilled artisans, such as the forehead and the two eyes, the stiff nose, the calm smile and the natural appearance of the harmonized jawline of the two cheeks."

The tile is cylindrical with a circular end and the woman conveys a delicate and contented expression with somewhat plump cheeks, gently closed eyes and her subtly upturned lip. The face pattern is particularly unusual because roof-end tiles were often decorated with lotus flower or dragon designs.

Like many other historical relics, the tile was snatched and kept by Japan during its 1910-45 colonial rule of the Korean peninsula.

In 1932, it was excavated at the site of a ruined temple in Gyeongju, the capital of the Silla dynasty, and purchased by a Japanese doctor. In 1940, the tile left its hometown when the doctor returned home. After being forgotten for decades, it was sent back to the museum in Gyeongju in 1972 thanks to strenuous efforts by a former museum head