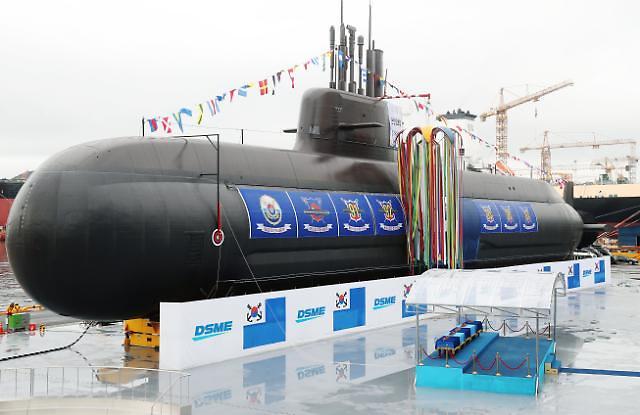 
SEOUL -- South Korea has finally achieved a technical breakthrough in developing a workable lithium-ion battery for a new generation of home-made submarines. The project, which began in July 2016, involved five research bodies and six companies including Samsung SDI, a top battery maker.

The Defense Acquisition Program Administration (DAPA), a state body controlled by the defense ministry, said Wednesday that lithium-ion batteries have passed its technical readiness assessment for 3,000-ton submarines under construction.

South Korea's first 3,000-ton submarine capable of firing ballistic missiles was unveiled on September 14. The diesel-electric submarine named "Dosan Ahn Chang-ho" can sail at a maximum speed of 37 kilometers per hour with about 50 people aboard. After an operational test and evaluation, it will be delivered to the navy.

Dosan Ahn Chang-ho was installed with lead-acid batteries like conventional submarines which use diesel-electric engines or nuclear power reactors as their main power source. Many shipbuilders preferred lead-acid batteries because they were relatively inexpensive and reliable.

DAPA officials said domestic companies and researchers addressed concerns about lithium-ion batteries, which were once seen as expensive and unstable for submarines, based on South Korea's advanced technology in the production of top-class batteries for electric devices and vehicles.

"Lithium-ion batteries are better in many ways as they take up less space than lead-acid batteries, and they are more power-efficient," a DAPA official told Aju News. "The new batteries have passed tests which simulated harsh situations such as an explosion, the flooding of seawater, fire and extreme temperatures."

Submarines mounted with lithium-ion batteries can stay underwater longer, while those using lead-acid batteries surface regularly to vent poisonous fumes created in the processes of cooling and charging, the official said on condition of anonymity.

"By developing new lithium-ion technology, we are expected to take a leading position in the global submarine industry," DAPA's submarine division head Chung Il-sik said in a statement, adding the new technology would bring a technical ripple effect to shipbuilding and other civilian sectors.

For its submarine project, South Korea has tried hard to localize parts. Dosan Ahn Chang-ho cost about one trillion won ($892 million) with its localization rate standing at 73 percent.

South Korea has a three-phase project to develop a fleet of submarines. Through the first phase, nine 1,200-ton subs have been built with technical help from Germany. In the second phase, six 1,800-ton hybrid diesel-electric/fuel cell vessels have been built and the third phase calls for the construction of 3,000-ton and 3,600-ton submarines.