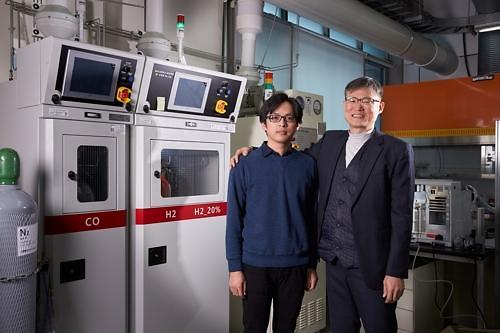 [Courtesy of the Ulsan National Institute of Science and Technology]


SEOUL -- Researchers from a prominent South Korean science school developed a method for the production of a cheap, highly durable and high-performance catalyst for water electrolysis, an important process to produce hydrogen.

The water electrolysis uses catalysts connected to a power source to decompose water into oxygen and hydrogen gas. The process, also known as the hydrogen evolution reaction (HER), is vital for the production of hydrogen, a next-generation eco-friendly fuel used in generators, vehicles and households.
Catalysts are normally made from expensive metals such as platinum or iridium and their efficiency varies depending on the acidity of water.

The Ulsan National Institute of Science and Technology (UNIST) said in a statement on Tuesday that its research team has developed "Ru@GnP", a ruthenium (Ru) on the graphene nanoplatelet (GnP) catalyst.

"The new material is semi-permanent and can be used in various environments," a UNIST researcher was quoted as saying. The Ru@GnP catalyst showed higher performance than commercial platinum catalysts in both acidic and alkaline waters.

Ruthenium is a rare metal that costs less than platinum. Graphene is a sheet-like material made from the single layer of carbon atoms arranged in a hexagonal lattice. Graphene is very durable and cheap compared to other rare metals. The new catalyst consumes 30 percent less electricity, compared to a platinum catalyst.

Because of the cost-effective characteristics of Ruthenium and graphene, the researchers said Ru@GnP would replace conventional catalysts in a year or two. The research paper was posted by Advanced Materials, a scientific journal.