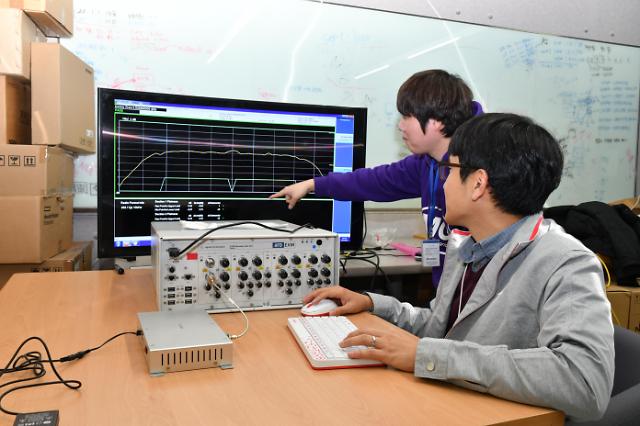 
SEOUL -- KT, a top telecom company in South Korea, produced the prototype of an advanced vehicle communication terminal, based on cellular vehicle-to-everything (C-V2X), which is instrumental in advancing vehicle connectivity for crash-free autonomous driving.

KT said Friday that the C-V2X terminal was the result of cooperation with IT Telecom, a V2X and ITS (intelligent transport system) solutions company, in a broad project to develop autonomous driving technologies. The company will test self-driving cars installed with C-V2X terminals for technical verification.

V2X communication is the passing of information from a vehicle to any entity. It incorporates other more specific types of communication to ensure road safety, traffic efficiency and energy savings. C-V2X communicates to a cellular network for cloud-based services like navigation and infotainment. It uses a direct link to communicate with other vehicles, smart infrastructure and pedestrians.

Along with V2X networks and vehicle communication terminals, South Korea is building an infrastructure for connected car services such as ultra-low-latency communication.

In a state project to test autonomous vehicles, KT has been selected to set up a fifth-generation (5G) network in K-City, a simulated city in Hwaseong south of Seoul that would have a highway, parking lots, local communities, living areas and complicated urban road conditions.

KT promised to develop a 5G V2X terminal. KT is one of South Korea's three companies which started offering 5G services partially in big cities on December 1. Full commercial service for ordinary clients will begin in March next year when the three companies complete the establishment of a nationwide network for smartphone users.