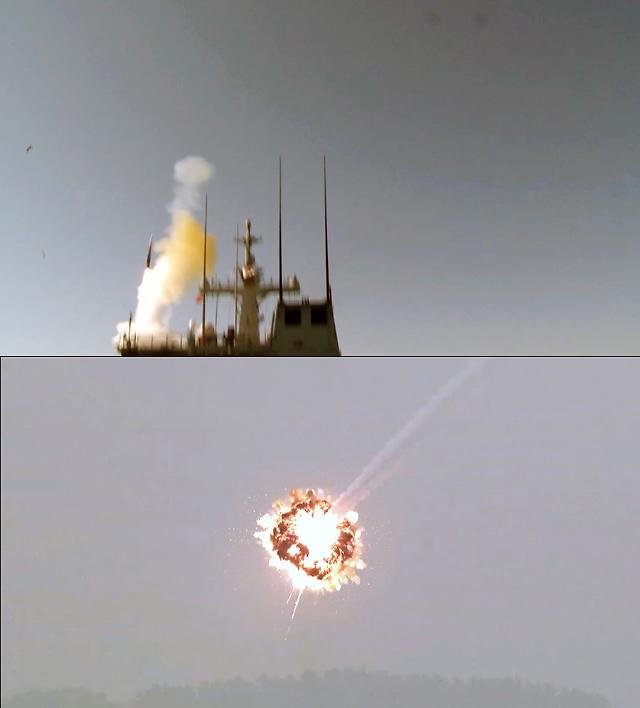 The Defense Acquisition Program Administration (DAPA) said Monday that the production of Haegung with a dual detector system -- active radar guidance and an infrared detector -- would begin in 2019 for use in frigates and landing ships. It adopted a vertical firing method.

Development of the Korean surface-to-air anti-missile (K-SAAM) with a maximum range of 20 kilometers (12 miles) began in 2011 to replace Raytheon's Rolling Airframe Missile (RAM). The Agency for Defense Development, a state research body, has been involved in the project with LIG Nex1, but the development period was extended following test failures in 2016.

Haegung has been related to the development of Cheongung, a surface-to-air missile (SAM) system with technical support from Russia's Almaz-Antey and Fakel, that can intercept targets up to an altitude of 15 km at a range of 40 km.

This year, policymakers decided to deploy the first batch of seven batteries by 2023 for the Cheolmae-2 (Cheongung) middle-tier missile defense system which can intercept targets at an altitude of up to 40 km. Cheolmae-2 was compared to American Patriot systems. A complete battery consists of up to six transporter erector launchers (TELs), an X-band 3D radar, and a fire command vehicle.