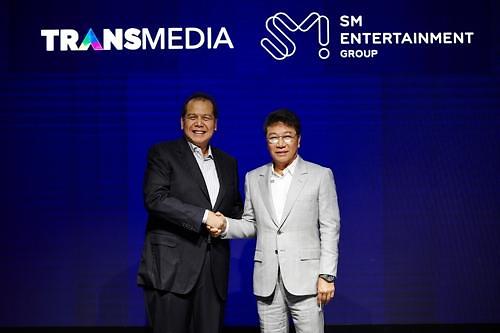 SEOUL -- In an effort to step up its presence in Southeast Asia, SM Entertainment, a leading K-pop powerhouse, agreed to set up a joint venture with Trans Media, a media company affiliated with Indonesian conglomerate CT Corp.

In a ceremony Thursday in Jakarta, the two companies signed a heads of agreement (HOA), which represents the first step on the path to a full legally binding contract, watched by CT Corp. chairman Chairul Tanjung and SM founder and head producer Lee Soo-man.

SM said that the joint venture would support the advancement of SM artists in Indonesia and the production of Indonesian pop content, focusing on comprehensive advertising, lifestyle business and digital contents distribution.

Rossa, an Indonesian singer who is also popular in Malaysia, Singapore and Brunei, will become the first artist to join the joint venture. She will collaborate with Super Junior for a special music release. Leeteuk, a Super Junior member, met with Ross at the Jakarta ceremony.

SM has accelerated its business in Asia. In January, it forged a partnership with the online music streaming service wing of China's technology giant Tencent to promote and distribute songs and music videos of SM artists such as EXO, Red Velvet and Super Junior.