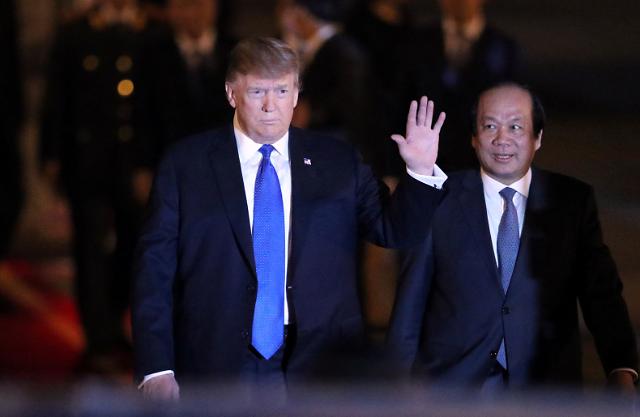 
HANOI -- In an amicable pre-summit message, U.S. President Donald Trump urged North Korean leader Kim Jong-un to look at Vietnam's dramatic rise through economic reforms and said the isolated country has a great opportunity and "awesome" potential if it abandons a nuclear program.

Trump and Kim are set to have a meet-and-greet for two hours, including a social dinner attended by two officials from each side, on Wednesday at the Sofitel Legend Metropole Hanoi hotel that would set the tone for a full session of official dialogue the following day.

U.S. Secretary of State Mike Pompeo and acting chief of staff Mick Mulvaney will accompany Trump at the dinner, while Kim will come with his top aide, Kim Yong-chol, and Foreign Minister Ri Yong-ho, according to the White House.

"Vietnam is thriving like few places on earth. North Korea would be the same, and very quickly, if it would denuclearize. The potential is AWESOME, a great opportunity, like almost none other in history, for my friend Kim Jong Un," Trump tweeted. "We will know fairly soon - Very Interesting!"

The message is clear. Trump wants North Korea to follow the footsteps of Vietnam in recharging its moribund economy that prompted Kim to select a peace offensive over apocalyptic threats with nuclear weapons and long-range ballistic missiles.

Well before his trip to Hanoi, Trump has emphasized North Korea's potential for rapid economic growth, saying Kim realizes that without nuclear weapons, his country could fast become "a great economic powerhouse," alluding to great incentives at stake.

"We want denuclearization, and I think he'll have a country that will set a lot of records for speed in terms of an economy," the American leader said in an earlier message, suggesting the Hanoi summit would provide a good chance for North Korea to rebuild its tattered economy.

Kim's diplomatic offensive that eased high tensions sparked speculation that North Korea may come out of its decades-long isolation to open up for economic development and cooperation with the international community.

The summit in Singapore demonstrated efforts to change the afflictive image of North Korea. Some pundits believe Kim's act of coming forth and stepping into negotiations on denuclearizing his country deserves commendation as he breaks the stereotype of the past intransigent North Korean leaders.
After a summit in Pyongyang in September last year, South Korean President Moon Jae-in said Kim expressed his willingness to focus on economic development through an early conclusion of denuclearization talks.

Under its Doi Moi reform policy initiated in 1986 at the height of an economic crisis, Vietnam opened its economy to capitalism, normalized relations with the United States in 1995 and became a member of the World Trade Organization (WTO) in 2007. As a result, Vietnam's gross domestic product soared to $224 billion in 2017.

Doi Moi, a top-down reform program with the goal of creating a "socialist-oriented market economy," transformed a stagnant peasant economy into a vibrant, market-driven, capitalist system. The sudden swelling of ranks of petty entrepreneurs produced a boom in local markets and the emergence of "street front capitalism" in urban areas.