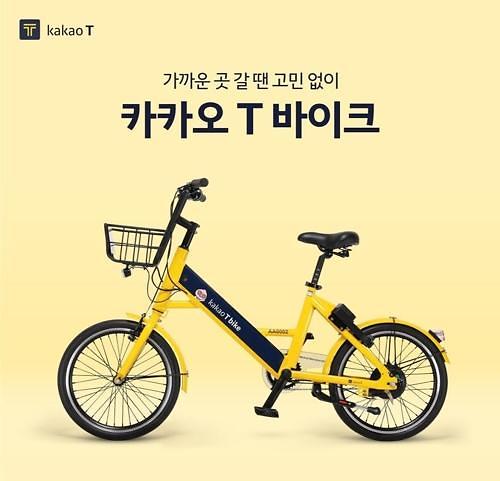 Kakao Mobility said in a statement Wednesday that the operation involving 100 e-bikes would be conducted in the western port city of Incheon and the southeastern satellite city of Seongnam.

Data from Statistics Korea, a government body, showed that as of 2015, at least 340,000 people ride bicycles to work or school daily. However, two-wheeled transportation is commonly considered dangerous and unfit for driving on crowded roads in a country with some 23 million registered vehicles.

Users will have to put down a security deposit of 10,000 won ($8.8) and rental fees will be automatically charged through a smartphone app depending on how long they use e-bikes. Kakao will charge 1,000 won for the first 15 minutes and an additional 500 won every five minutes.

There are several bike-sharing or bike rental services in operation mainly in Seoul and the most successful one is Seoul Bike, also known as "Ttareungi", run by Seoul City. There are about 1,300 Seoul Bike stations located mainly near subway stations and populated areas. There are some 5,000 people using the Ttareungi service every day. Because of its growing popularity, Seoul plans to test operate 1,000 e-bikes this year.

Unlike other services that require users to rent and return bikes to designated stations, Kakao service users can lock up bikes at their destination.