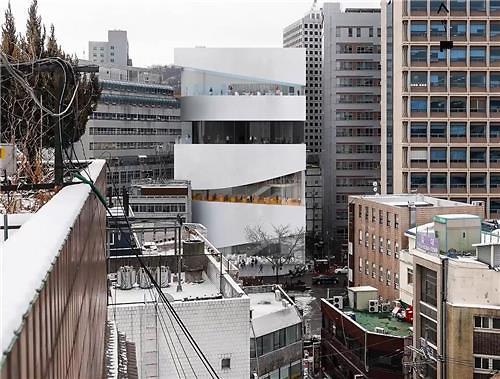 SEOUL --  The exterior walls of a public building to be erected in Seoul will wear light-reacting photocatalytic paint to see if it is efficient in mitigating air pollution caused by fine dust and other hazardous particles which posed a stringent health threat to Seoulites.

The densely populated South Korean capital has launched a desperate campaign to fight air pollution in vain as citizens were exposed to fine dust often throughout this winter. Seoul and nearby areas were hit by a record level of fine dust for six days in a row until Thursday.

Fine dust, which refers to particles smaller than 10 micrometers, causes various respiratory problems. China has been cited in South Korea as the main culprit for aggravating particulate pollution on the Korean peninsula, but experts also point to power plants and vehicles using fossil fuel.

The Seoul city government came up with an experimental idea Thursday to use photocatalytic paint that would cover the exterior walls of Cinematech, a public art cinema building to be built in October. City officials hope the light-reacting paint will absorb and remove pollution particles.

Photocatalytic paint uses photodecomposition method, a chemical reaction of chemical compounds being broken down by electromagnetic lengths of visible light or higher such as x-rays and ultraviolet light, to absorb and break down fine dust. Substances which are left over after the decomposition process will get washed away with rainwater.

"After monitoring its effect, we plan to expand the application of photocatalytic paint to all public buildings," a Seoul city official said in a statement. According to Seoul Housing & Communities Corp., a public construction company operated by Seoul, a 1,000-square meter surface covered with photocatalytic paint can remove 3.4 kilograms (7.4 pounds) of fine dust annually.