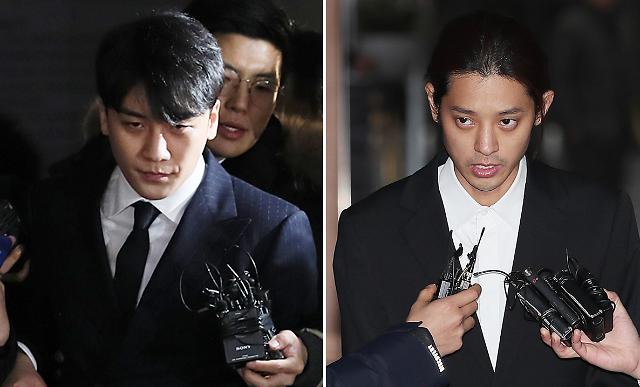 
SEOUL -- A snowballing sex and corruption scandal involving K-pop stars has brought to light the hidden dark side of the K-pop industry, and dealt the most devastating blow yet to K-pop's breakneck growth into a lucrative, roaring international business.

Seungri, of boy band BIGBANG, and singer-songwriter and TV personality Jung Joon-young are grabbing headlines this week after their ugly deeds, once hidden behind the glossy veneer of the K-pop scene, were exposed.

The 29-year-old Seungri is facing allegations that he procured sex services for potential investors from abroad at local nightclubs and that he has taken part in the running of a nightclub, Burning Sun, where drug use and acts of sexual violence frequently occurred.

The 30-year-old Jung is alleged to have secretly filmed sexual acts with some 10 women and circulated the videos in mobile chat rooms that included Seungri in 2015. They underwent marathon police interrogations that lasted from Thursday to Friday morning amid intense public attention.'

As the sex and corruption scandal snowballed, their high-profile entertainment careers crashed to a sudden halt. On Monday, Seungri announced his retirement from show business and YG Entertainment, the management agency of BIGBANG, later ended its contract with him, making it impossible for the boy band to release music with its full lineup.

Jung's management agency, Make Us, also terminated its contract with him on Wednesday after he admitted to the criminal acts and pledged to give up his entertainment career.

The scandal is the first major warning to K-pop, and the wider entertainment industry, which have fiercely pursued popularity and chart performance at the cost of integrity and moral values.

Behind K-pop's roaring success across the world, and enormous contributions to the global promotion of the image of South Korea, have been continuous warnings against the pop industry's conveyor-belt production system.

"As the entertainment production industry developed, many K-pop agencies ran programs to manage stars' characters and personality, as highlighted by JYP Entertainment and BTS," pop columnist Kim Kyo-seok told Yonhap News Agency. "But at some point, it becomes impossible to manage (the private lives of) high-profile stars and amid a lack of systems to do so, management agencies resorted to (illegal means) to control news reports or collude with law enforcement authorities."

Kim said producers of TV programs also tended to avoid verifying the personal backgrounds of their casts in their avid chase for profits and popularity. "This incident may serve as an opportunity to raise awareness of the sense of entitlement and privilege among (K-pop) stars," he noted.

Still, the scandal could still widen and inflict further damage on the K-pop industry, which has almost 90 million registered fans worldwide as of 2018, according to a tally by the Korea Foundation.
(Yonhap)