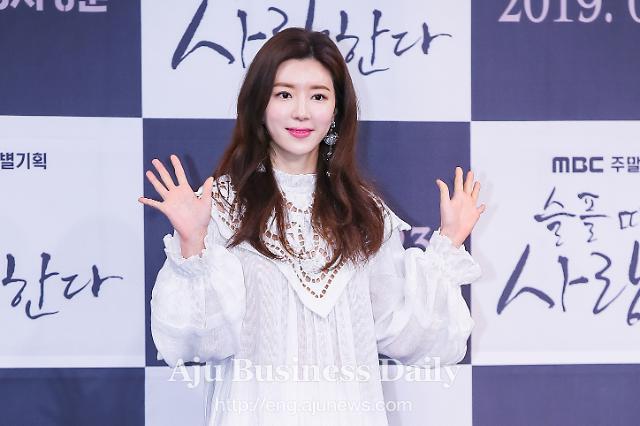 The 34-year-old actress said in an Instagram post on Tuesday that she is not free from the past of her husband, Yoo In-seok, who has partnered with Seungri to launch an entertainment and restaurant company. Yoo and Seungri were accused of using dance and music clubs to arrange sexual services for business favors.

"I feel responsible for all the controversies, and no matter what the results may be, I will take the whole ordeal as a process to guide my family to the right path," Park said.

Park and her husband are suspected of playing golf with a senior police officer and his wife. The officer has been investigated on charges of spying on a police investigation into illegal business activities by Monkey Museum, an entertainment club co-founded by Seungri and Yoo.

The police officer was cited in a messenger group chat that involved Seungri, Yoo and others. Investigators found that the messenger log contained expressions that police were backing Seungri and his business. Park has been under fire because she behaved as if she has nothing to do with her husband's deeds.

Seungri's sex scandal surfaced in January when a 28-year-old man claimed that he was brutally beaten by the employees of Burning Sun, a music and dance club associated with Seungri. The man also claimed that he was mistreated by police without receiving proper medical treatment for several hours.

The scandal has also exposed drug trafficking by Burning Sun employees. On Monday, police have applied for a court-issued warrant to arrest singer-songwriter Jung Joon-young on charges of sharing illegally filmed sex video files with other people including Seungri and three other artists.