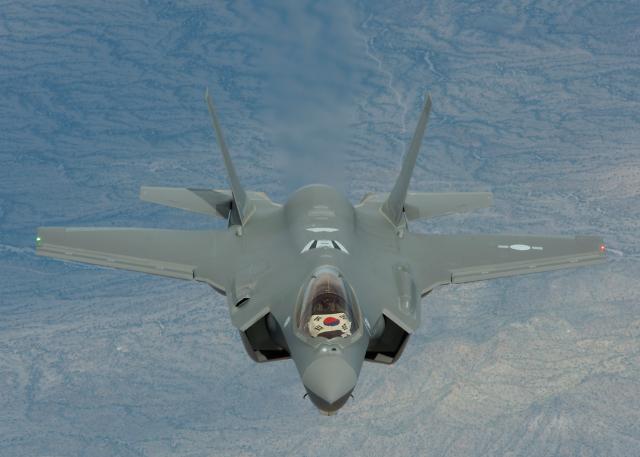 SEOUL -- The first batch of two F-35A stealth jets arrived in South Korea, inaugurating the era of strategic fifth-generation stealth combat aircraft in Northeast Asia. A ceremony was held on Friday at an air base in the central city of Cheongju to greet the landing of F-35As.

The two F-35As manned by American pilots have traveled from an air base in Arizona, using an aerial refueling aircraft, to arrive in South Korea, according to the Defense Acquisition Program Administration (DAPA)

"We hope the Air Force will improve its operational capability for the establishment of omnidirectional defense readiness such as countermeasures against the introduction of stealth planes by neighboring countries," DAPA head Wang Jung-hong said.

Under a 2014 deal with Lockheed Martin, 40 F-35A Lightning II jets will be delivered to South Korea by 2021. Military officials have hailed the deployment of stealth jets as a milestone in South Korea's air defense because they can attack crucial military facilities in North Korea and probably beyond the Korean peninsula.

China has put its Chengdu J-20 stealth jet into service and Japan is deploying F-35As. The intermittent appearance of Chinese warplanes flying through strategic air corridors between the Korean peninsula and Japan has triggered security alerts in Northeast Asia.

Beijing, which is about 950 kilometers (590 miles) away from Seoul, has reacted sensitively to U.S. strategic military assets in South Korea. The deployment of an advanced missile shield by American troops stationed on the Korean peninsula has caused a diplomatic row between Seoul and Beijing.