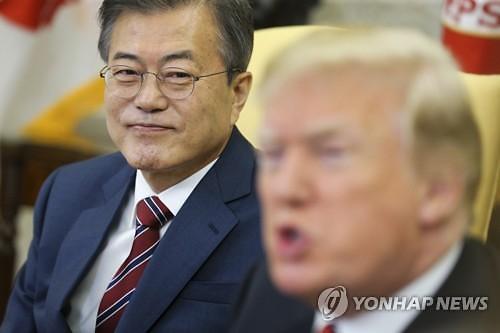 WASHINGTON -- U.S. President Donald Trump said Thursday he aims to strike a "big deal" with North Korea on its nuclear weapons program while keeping sanctions in place for now.

Trump made the remark at the start of a meeting with South Korean President Moon Jae-in at the White House, which came weeks after his nuclear summit with North Korean leader Kim Jong-un in Vietnam collapsed without a deal.

"You can work out, step by step, pieces," Trump said, conceding that "various smaller deals" could happen. "But at this moment, we're talking about the big deal. The big deal is we have to get rid of the nuclear weapons."

Moon is expected to use his meeting with Trump to push for a revival of talks between the U.S. and North Korea as the two sides have been at an impasse over how to match the regime's dismantlement of its nuclear weapons program with sanctions relief from the U.S.

"We want sanctions to remain in place," Trump said, noting that he held back on additional sanctions on North Korea last month because of his "relationship" with Kim.

Still, he expressed an openness to making economic concessions to North Korea at the right time. Those concessions would include the reopening of an inter-Korean industrial complex in North Korea's border town of Kaesong and the resumption of tourism to the North's Mount Kumgang.

"This isn't the right time," Trump said. "But at the right time, I'd have great support with North Korea." He added that he and Moon are discussing "certain humanitarian things," such as food aid to North Korea, which he said one has to be open to.'

Trump held open the door to additional meetings between himself and Kim, as well as among all three men. The latter, he said, would depend largely on Kim. But asked if he has been in communication with the North Korean leader in recent weeks, he declined to answer.

"I enjoy the summits. I enjoy being with the Chairman," Trump said. "I think it's been very productive. And it really is -- it's a step by step. It's not going to go fast. I've been telling you that for a long time. If it goes fast, it's not going to be the proper deal."

The U.S. president also spoke of the bilateral relationship with South Korea, saying the ally nation has agreed to buy a "tremendous amount" of American military equipment, including fighter jets and missiles.

He was asked by a reporter whether he is considering a long-term -- instead of a one-year -- cost-sharing agreement with Seoul for the stationing of 28,500 American troops in South Korea.

He also touted his relationship with Moon, saying the two are "very, very close." In a nod to South Korea's first lady, Kim Jung-sook, who accompanied her husband, Trump said she and his wife, Melania, are also "extremely close."