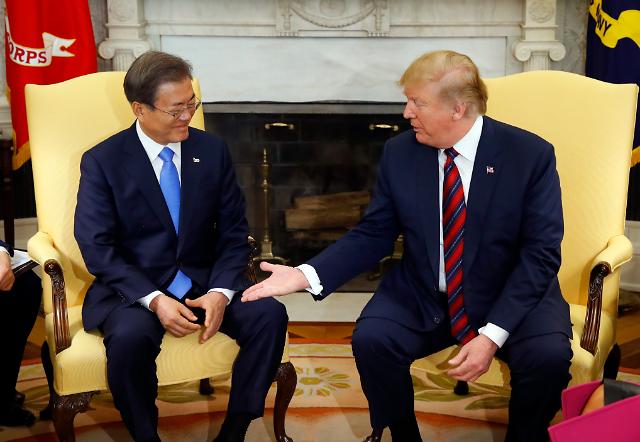 WASHINTON -- The leaders of South Korea and the United States agreed to continue their dialogue with North Korean leader Kim Jong-un, highlighting the importance of the so-called top-down approach in ridding North Korea of its nuclear weapons.

"In this regard, President Trump said the door for dialogue with Chairman Kim is always open," the South Korean official told a press briefing. The Moon-Trump summit came after Trump's second summit with Kim in Hanoi ended without a nuclear deal, also prompting an apparent stall in U.S.-North Korea talks on ending the North's nuclear ambition.

Moon insisted the Hanoi summit was part of a long process to reach a greater deal. "The situation on the Korean Peninsula changed dramatically after President Trump held a meeting with Chairman Kim Jong-un on June 12 last year," he said at the start of his summit with Trump at the White House.

Moon arrived here Wednesday on a two-day visit. The South Korean president stressed the need to continue engaging the North in dialogue. "I believe what is important now is to maintain the momentum of dialogue, and offer an outlook to the world that a third North Korea-U.S. summit will be held in the near future," he said at the start of his summit.

The U.S. president said he wished to continue holding dialogue with the North Korean leader. "It could happen," Trump said when asked about the possibility of his third summit with North Korea's Kim. "I enjoy the summit. I enjoy being with the chairman and it really is a productive and it really is a step by step," he added.

Moon told Trump that he will push for his own bilateral summit with the North Korean leader in the near future, according to Chung. Moon and Kim have met three times. Kim was earlier expected to visit South Korea to reciprocate Moon's trip to Pyongyang in September for their third and latest summit.

An official from Seoul's presidential office, Cheong Wa Dae, said Trump asked the South Korean leader to identify what the North wants through his meeting with Kim and to let him know the outcome of the inter-Korean summit as quickly as possible.

Thursday's meeting was widely expected to focus on ways to restart the U.S.-North Korea dialogue. Trump noted the Hanoi meeting may have failed to achieve all he wanted to, but said "certain things were very good."

Trump still appeared to remain opposed to providing any interim rewards to North Korea. "No, we want sanctions to remain in place," he said when asked if he may consider sanctions relief. "I think that sanctions are right now in a level that is fair and I really believe something significant is going to happen."

The South Korean president has voiced the need to provide the impoverished North with some carrots that he says would only encourage the country to further accelerate its denuclearization process.
(Yonhap)