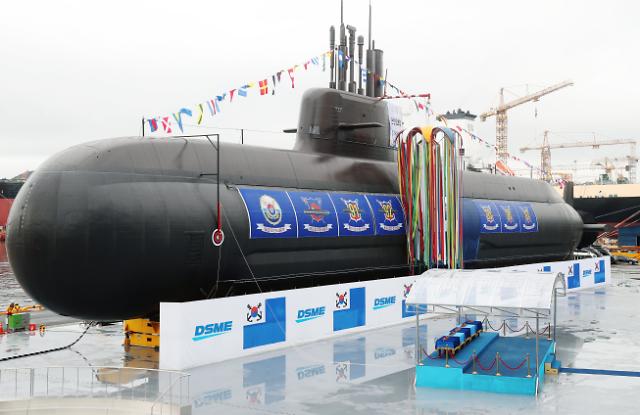 SEOUL -- Indonesia agreed to buy three more 1,400-ton submarines from South Korea in a $1.02 billion deal. It was the second submarine contract between the two countries which have maintained close military ties with Indonesian engineers involved in defense projects in South Korea.

Daewoo Shipbuilding & Marine Engineering (DSME), the main builder of South Korean submarines, signed a contract Friday in a ceremony attended by Indonesian and South Korean officials, according to the South's Defense Acquisition Program Administration (DAPA), a state body controlled by the defense ministry.

The ceremony in Bandung in West coincided with the launch of DSME's third 1,400-ton submarine, which has been assembled in Indonesia following the delivery of two in 2017 and last year, respectively, under a $1.07 billion contract in 2011. South Korea has agreed to supply improved Chang Bogo-class submarines equipped with torpedoes and guided missiles.

In a three-stage military program, South Korea has built 1,200-ton submarines with technical help from Germany. In the second phase, six 1,800-ton hybrid diesel-electric/fuel cell vessels have been built and the third phase calls for the construction of 3,000-ton or 3,600-ton submarines. The first 3,000-ton submarine capable of firing ballistic missiles was unveiled in September last year.

KAI produces South Korea's first supersonic trainer, T-50, which has been developed into aerobatic and combat variants. A variant of T-50 has been ordered by Indonesia and the Philippines.

In January 2016, South Korea launched the KF-X project to manufacture home-made fighter jets with technical support from Lockheed Martin. In return for investing some 20 percent of total expenses, Indonesia agreed to receive a prototype plane, gain access to some technical data and information, and produce planes on its home soil.