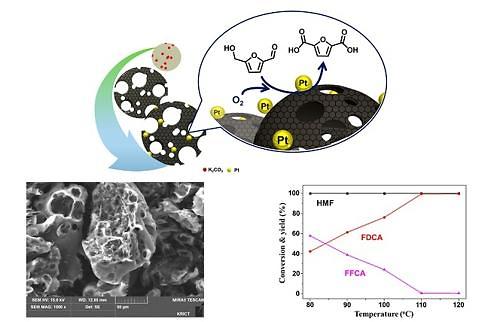 Polyethylene furanoate (PEF) is a real bio-based alternative to petroleum-based PET. it is considered an alternative for packaging applications as it exhibits an intrinsically higher gas barrier for oxygen, carbon dioxide and water vapor than PET. Catalysts used for PEF production depend on expensive gold or hazardous lead.

The Korea Research Institute of Chemical Technology (KRICT) said Wednesday its research team has developed a powder-type catalyst for the production of 2,5-Furandicarboxylic acid (FDCA), an organic chemical compound used as a raw material for PEF.

2,5-FDCA comes from the 5-HMF (Hydroxymethylfurfural), but a number of by-products could come together, the institute said, adding its new catalyst can convert 5-HMF into only 2,5-FDCA, by combining metal particles into carbon-based support derived from chitosan biomass, which is made by treating the chitin shells of shrimp and other crustaceans.