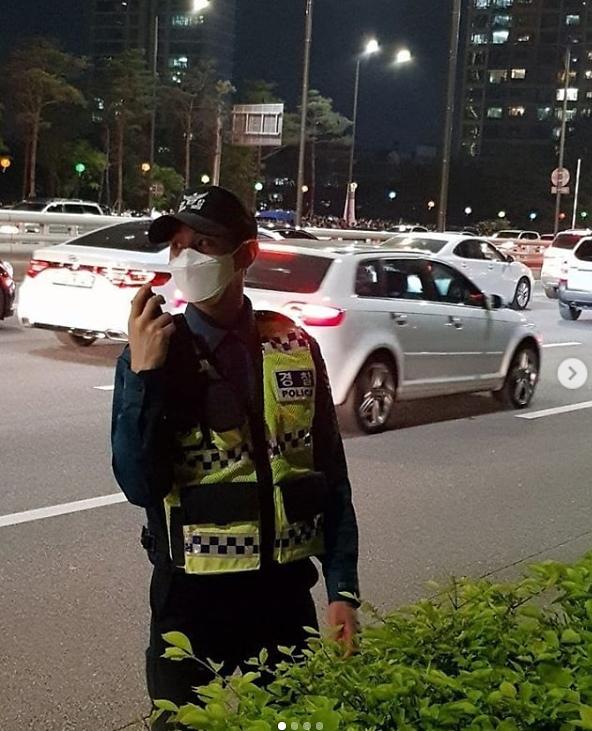 This photograph taken by a fan shows Yang Yoseob on duty as a conscripted policeman in Seoul on May 5. [Instagram]

SEOUL -- The management agency of Highlight member Yang Yoseob has urged fans not to disturb or follow the 29-year-old singer who is on his duty as a conscripted policeman in Seoul.

"We ask everyone to refrain from paying too much attention to Yang Yoseob so that he can carry on with his military service without any trouble," Around Us Entertainment said in a statement, urging some enthusiastic fans at home and abroad to refrain from following Yang.

Yang entered an Army boot camp in January and he is currently serving as a conscripted policeman in eastern Seoul. Dozens of photographs showing Yang on duty have been uploaded onto Instagram. Fans have shared information about Yang's whereabouts in real-time.

The agency said that following Yang would put him and his colleagues in difficult situations.

Along with cyber bullies who harass celebrities with coordinated cyber attacks, overly intrusive fans, also known as "Sasaeng fans", have long been a problem in South Korea's K-pop scene. Three years ago, Girls' Generation member Taeyeon expressed her frustration at intrusive fans who have repeatedly called her at night.

In 2018, Wanna One, a popular project boy band, urged Sasaeng fans to stop violating privacy after members denounced some fans for trying to contact them by obtaining phone numbers.