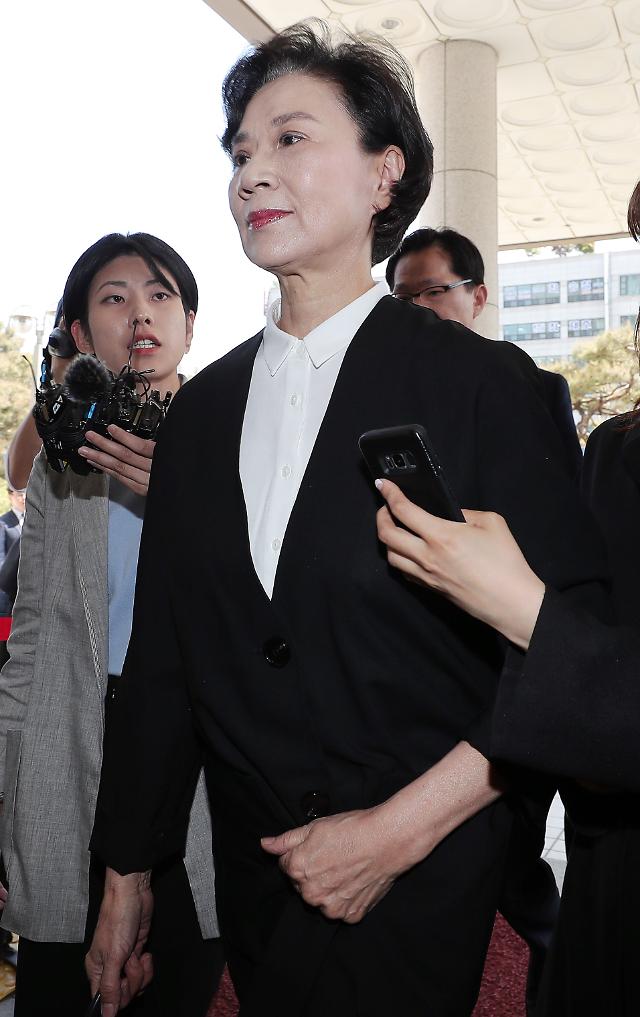 Lee Myung-hee, the wife of Hanjin Group's late chairman Cho Yang-ho, walks into the court in the western port city of Incheon on May 16. [Yonhap News Photo]


SEOUL -- The wife of Hanjin Group's late chairman Cho Yang-ho and her daughter begged for mercy, insisting they have committed a sin "unknowingly", as prosecutors demanded jail terms on charges of smuggling luxury goods through an airport clearance desk for Korean Air.

"A sin committed unknowingly is heavier," Lee Myung-hee, 69, said in her final statement at a criminal court in the western port city of Incheon. "I thank investigators and prosecutors for letting me know that this is a sin, and such a thing will never happen again in the future."

Prosecutors demanded a one-year jail term, a fine of 20 million won ($16,800) and the forfeit of 32 million won. Lee stood trial with Cho Hyun-ah, a former Korean Air vice president known for a "nut rage" incident in 2014, on charges of bringing in various items, including luxury items, worth a total of some 130 million won from 2012 without paying customs.

Prosecutors demanded a 16-month jail term and the forfeit of 62 million won for Cho Hyun-ah. "I sincerely repent for committing this mistake without properly checking legal procedures," she said.

Lawyers called for leniency, saying their clients accepted all charges filed by prosecutors and became remorseful for accidentally finding out the convenience of Korean Air's clearance system. They insisted most of the items brought in by Lee and her daughter were not luxury items but daily necessities such as clothes and toys for children.

Lee has been widely criticized as a typical example of "Gapjil" that means an abuse of power such as mistreatment, arrogant behavior, crude talk, character assassination, and insults. She allegedly hurled a pair of pruning shears at a security guard in his house for failing to take care of the house door properly, kicked a chauffeur for a mistake in the street, beat a gardener and slapped a construction worker.

In a separate case two weeks ago at a district court in Seoul, prosecutors demanded a fine of 15 million won for Cho Hyun-ah for having hired five Filipino housemaids from 2013 by forging documents to pretend they were Korean Air employees. Lee stood in the same court on similar charges.

Cho Hyun-ah, 44, became enraged in December 2014 when a flight attendant served her some nuts in a bag, rather than on a plate, on board a flight that was forced back to the gate while taxiing to the runway.

The 2014 incident fueled public anger as it followed a slew of incidents involving group owners and their offsprings. She was given a twelve-month prison sentence on conviction of violating aviation safety laws, but an appeals court overturned the conviction and handed down a suspended jail term, allowing her to walk free in May 2015.