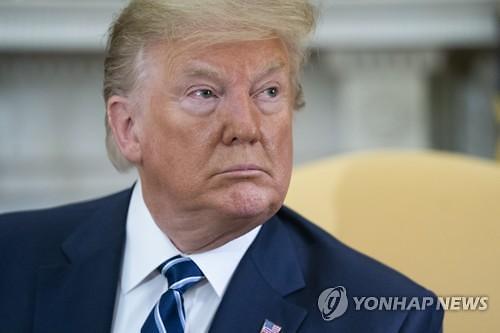 SEOUL -- U.S. President Donald Trump showed excitement at his planned trip to the inter-Korean border after he asked North Korea's reclusive leader Kim Jong-un to show up for a historic rendezvous at a symbol of division and Cold War confrontation for more than six decades.

"We are going to make a visit to the DMZ," Trump told South Korean business leaders, citing a joint journey with President Moon Jae-in to the border truce village of Panmunjom that would follow their summit.

The demilitarized zone (DMZ) is a four-kilometer-wide strip of land that has divided the Korean peninsula since an armistice accord ended the three-year Korean conflict in 1953. Civilian access has been barred to the zone heavily fortified with minefields, concrete walls and electric fences. Armed clashes and shooting have raised cross-border tensions sporadically between South and North Korean troops manning entrenched concrete guard posts.

"I'm going to the DMZ and I understand that they want to meet. I would love to say hello," Trump said, adding it would not be a long trip. "It's good for both of us. Let's see what happens. we are trying to work it out."

"If he's there, we'll see each other for two minutes," Trump told reporters before attending a welcome dinner hosted by Moon the previous night. The U.S. leader said that even if Kim shows up, it would not be a formal meeting. "We won't call it a summit. We'll call it a handshake."

In a statement carried by Pyongyang's state media, Choe Son-hui, the North's first vice foreign minister, described Trump's surprise offer as "very interesting" and said that if the meeting in Panmunjom takes place, it would serve as "another meaningful occasion in further deepening the personal relations between the two leaders and advancing the bilateral relations."

If Trump and Kim appear together in Panmunjom, it will be their third meeting. The two leaders last met in Vietnam on February 28, eight months after they signed a denuclearization deal in their first summit in Singapore in June last year.

If Trump crosses the borderline, he will be the first U.S. president ever to step on North Korean soil. Trump said he would have "no problem" stepping into North Korean territory, as Moon did for his historic rendezvous.

In April last year, the scene of Moon and Kim shaking hands across a raised, foot-wide concrete curb that serves as the borderline in the joint security area in Panmunjom drew tremendous attention from the international community.

After a handshake, Kim made a sudden move to invite Moon to his side. Holding hands, the two leaders briefly crossed the border together to the northern side. The historic meeting took place in a four-meter-wide pathway between two blue buildings which have been used for military talks between North Korea and the United Nations Command (UNC) since the 1950-53 Korean War ended in an armistice with no peace treaty signed.

American troops, which are stationed in South Korea under a mutual defense pact, has led the U.N. command. U.S. troops maintain a special strike force is on standby near Panmunjom as well as a front-line camp just outside the DMZ.

To remove the risk of war, the two Koreas stopped all hostile activities including artillery drills and field maneuvers on November 1 last year by setting up maritime, air and ground buffer zones in front-line areas. Kim and Moon have also agreed to disarm and turn Panmunjom into a true peace zone.