Trump boasts of 'a certain chemistry' with Kim unlike his predecessor

SEOUL -- U.S. President Donald Trump made a vaunt of sharing "certain chemistry" with North Korean leader Kim Jong-un ahead of their historic rendezvous in the truce village of Panmunjom, a symbol of division and Cold War confrontation for more than six decades.

If realized, Trump would be the first U.S. leader to have such a meeting inside the demilitarized zone (DMZ), a four-kilometer-wide strip of land that has divided the Korean peninsula since an armistice accord ended the three-year Korean conflict in 1953. The zone has been heavily fortified with minefields, concrete walls and electric fences. Armed clashes and shooting have raised cross-border tensions sporadically.

"I would be meeting Chairman Kim. I look forward to it very much," Trump told reporters after summit with 0South Korean President Moon Jae-in in Seoul. Trump and Moon were to visit Panmunjom together.

Trump proudly said he has achieved what his predecessor, Barack Obama, couldn't do. Despite constant begging by the Obama administration, Kim has refused to meet, Trump said. "For some reasons, we have a certain chemistry or whatever."

"For the first time in history, U.S. and North Korean leaders will face each other at the truce village of Panmunjom, a symbol of division, to shake hands for peace," Moon said. "I sincerely hope that President Trump will be remembered as the president who achieved peace on the Korean Peninsula."

The event in Panmunjom underlines Trump's bid to highlight his image as a peace broker ahead of the presidential election in November 2020. Playing to the domestic audience, Trump said "a lot's been done" since he took office, with the two Koreas feeling better than before with no more ballistic missile test or nuclear test.

In his earlier speech before South Korean business leaders, Trump compared his peace initiative with Obama's. "I honestly believe you would be at war with North Korea."

Showing fatigue at a stalemate in negotiations, Kim has threatened to take a different path, urging Washington to come up with a "fair" and "mutually acceptable" deal by the end of this year. But he did not blow a hard-won change for dialogue, exchanging personal letters with Trump.

Trump has also expressed his willingness for dialogue, endorsing the shipment of South Korean food aid to the impoverished North, which has reduced state rations due to a chronic food shortage aggravated by a prolonged drought this year. 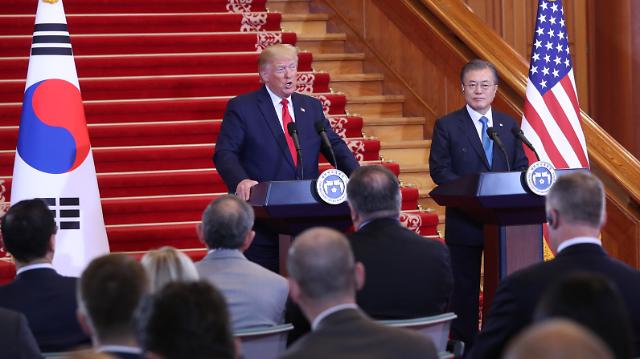 For many years, the U.S. and the international community have put strict sanctions against Pyongyang, demanding complete and swift denuclearization. Kim wants more than U.S. cooperation and rewards such as sanctions relief and a security guarantee. In previous negotiations, North Korea has been reluctant to make concessions without strong U.S. commitments to tangible economic and diplomatic benefits.

The landmark summit in Singapore in June last year opened a new era of peace between Washington and Pyongyang and a rare detente on the Korean peninsula. After Kim committed to working for "complete denuclearization" in exchange for Washington's security guarantees, Trump suspended joint war games between U.S. and South Korean troops to facilitate a nuclear deal.

However, there has been a dispute over how much Washington's demand for complete denuclearization should be reflected in a nuclear deal, stoking worries about Pyongyang's possible retreat. In a series of ensuing negotiations, Washington and Pyongyang actually have failed to narrow differences in particulars.

At their second meeting in Hanoi on February 28, Trump and Kim walked away from the dialogue table. As a deal breaker, Trump pointed to demands for the complete lifting of sanctions and a different vision of denuclearization, while Kim had wanted partial sanctions relief, based on the principle of confidence building and phased resolution.

In return for sanctions relief, North Korean officials said Kim proposed the permanent shutdown of "all facilities" used to produce nuclear materials in the North's main nuclear complex in Yongbyon in the presence of U.S. experts.

Moon said that if North Korea completely shuts down Yongbyon, it would pave the way for the international community to have a discussion on how to ease sanctions.