SEOUL -- President Donald Trump opened a new chapter in history, becoming the first U.S. head of state to step onto the soil of North Korea, an old war adversary, and shake hands with its leader in the truce village of Panmunjom, a symbol of division and Cold-War confrontation for more than six decades.

Trump and Kim set a milestone by walking back and forth across the borderline in Panmunjom in the joint security area which was established in 1953 when an armistice accord ended the three-year Korean conflict.

The historic encounter came after Trump turned up first out of a building on the southern side of Panmunjom and walked slowly towards a raised, foot-wide concrete curb that serves as the borderline. Kim, clad in his trademark black Mao-style suit, showed up later with a broad smile on his face and held out his hand for a handshake. 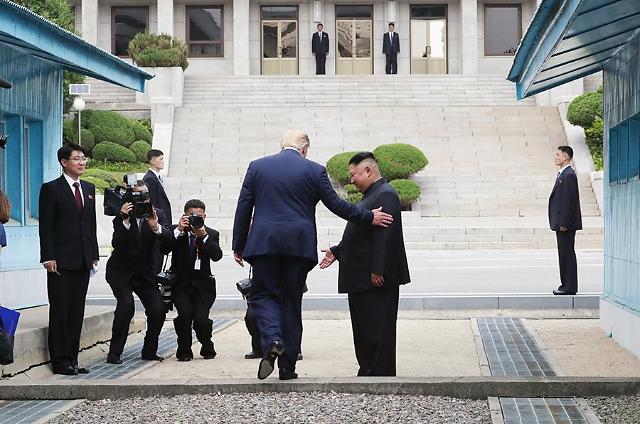 After an exchange of greetings, Kim made a sudden gesture to invite Trump to his side. The two leaders made several strides on the northern side and walked back together and stood near the borderline in front of photographers and reporters who were jostling to capture the historic scene, which took place in a four-meter-wide pathway between two blue buildings.

Stepping across the borderline was "a great honor," Trump said, complementing Kim for responding to his sudden social media proposal for an unscheduled meeting in Panmunjom.

"A lot of positive things are happening and I'm glad you’re here to see it. Tremendous positivity. Really great things are happening in many places. We liked each other from day one and that is really important," the U.S. leader poured out his words in an elated voice.

At first, Trump looked nervous but exuded confidence, patting Kim's back and escorting the young, inexperienced leader into the southern side. 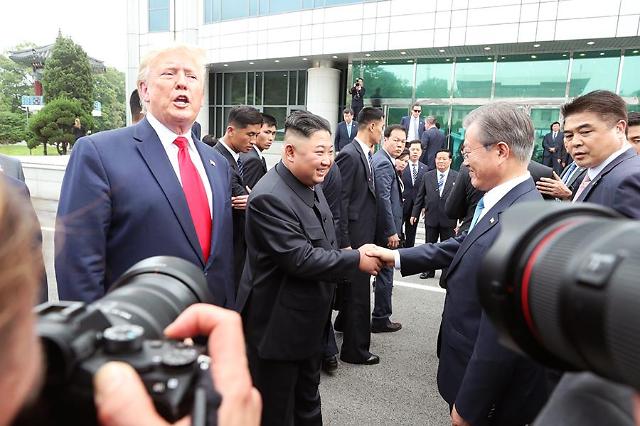 Kim was seen bursting into short laughs on several occasions and shook hands with South Korean President Moon Jae-in before holding a one-on-one meeting with Trump in the House of Liberty. "This is a special moment, and I think really, as President Moon said, it's a historic moment," Trump said in opening remarks.

The meeting in Panmunjom was not pre-arranged, Kim said, adding he was surprised to see Trump's quick proposal for talks in a symbol of division and a reminder of the bad past.

Kim agreed to come and shake hands with Trump because "it could have a positive effect on what we do in the future" and show the world that the two countries can make a different future.

"Speed is not the object," Trump said. "We want to see a really comprehensive good deal. Nobody knows how things turn out but certainly, this was a great day, very legendary, very historic day."