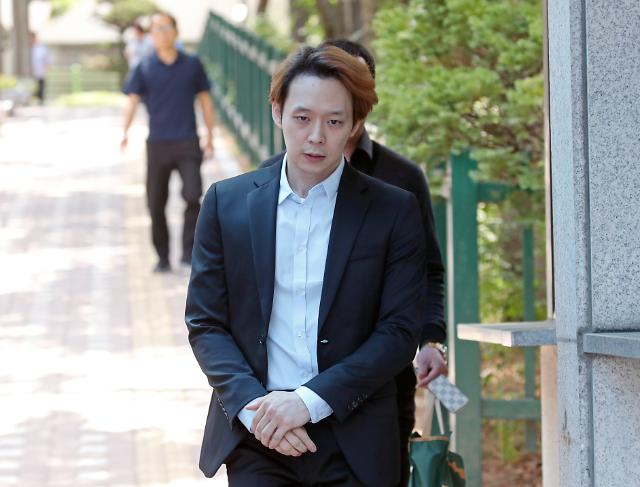 SEOUL -- Park Yoo-chun, a singer-actress known by his stage name Yoochun, was found guilty of purchasing and using methamphetamine, but a criminal court handed down a suspended jail sentence, citing his deep repentance during his two-month detention.

A court in the southern city of Suwon sentenced the expelled member of K-pop band JYJ to 10 months in prison with a stay of execution for two years. The courtroom was packed with South Korean and Japanese fans.

The court ruled on Tuesday that Park, 33, should be given a chance to socialize again as he has acknowledged his crime, showing remorse for his wrongdoings since he was arrested. "At this stage, it seems to be in line with the purpose of punishment to give him a chance to re-socialize with a suspended prison sentence," said the court's judge, Kim Doo-hong.

"From now on, I will work hard and honestly while serving society a lot," Park told reporters outside detention facilities in Suwon. "I apologize from the bottom of my heart for causing concern to many people."

He expressed sorry to fans, wiping off tears as dozens of Korean and Japanese fans chanted his name.

Park's lawyer has called for leniency, saying his client was unable to live normally and ended up on drugs due to his mental anguish that began in 2016 when he was accused of buying sex from a woman.

Park was indicted for purchasing and using 1.5 grams of methamphetamine. The drug case came to light during a drug investigation into Hwang Ha-na, a 31-year-old granddaughter of the late founder of Namyang Dairy Products. Hwang told investigators that she took methamphetamine with Park at her home.

The two promised to marry in 2017 but separated the following year. Initially, Park strongly refuted Hwang's claim. He was expelled from his agency in April.