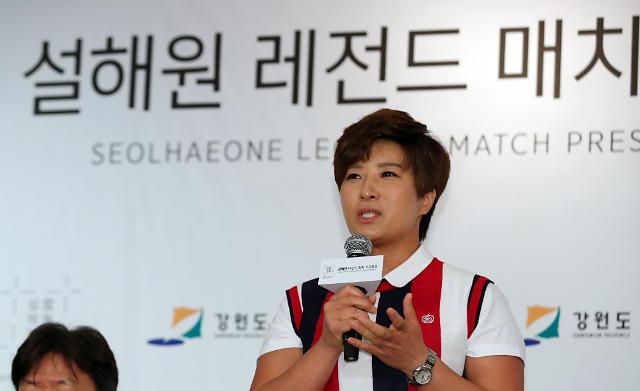 
SEOUL -- An east coast golf resort in South Korea will host some of the biggest names in women's golf from the past and present in an exhibition match in September.

Seolhaeone Resort in Yangyang, about 215 kilometers east of Seoul in Gangwon Province, will provide the stage for the Seolhaeone Legends Match from Sept. 21-22.

South Korean star Pak Se-ri, a World Golf Hall of Famer with 25 LPGA titles and five major championships, will be one of four members of the "LPGA Legends" team. And Park Sung-hyun, current world No. 1 from South Korea, will be part of the "Next Generation" team.

At a press conference in Seoul, Pak unveiled the star-studded lineup for the two-day event. Joining Pak on the Legends team will be Annika Sorenstam, one of the greatest players in LPGA history with 72 career victories and 10 major titles. Pak and Sorenstam went toe-to-toe from the late 1990s to the early 2000s to form a memorable rivalry.

The Swede legend was the LPGA Player of the Year eight times, including in five straight seasons starting in 2001.

Another former LPGA star in the field will be Lorena Ochoa, who won the next four top player awards after Sorenstam from 2006 to 2009. Hardly anyone was more dominant than Ochoa at the top of her game. The Mexican star also won four straight scoring titles from 2006 to 2009 and 24 of her 27 career titles came during that four-year span.

Juli Inkster, a Hall of Famer from the United States with seven major titles, will also be in the field in Yangyang. She is the only LPGA golfer to win multiple majors in three consecutive decades, with three in the 1980s, two in the 1990s and two more in the 2000s.

Pak said she was "extremely happy" to get a chance to play alongside Sorenstam, Ochoa and Inkster again. "This takes me back in time to my playing days when we were competing against each other," Pak said. "I hadn't played much golf after retirement, but I started training for this event a while ago. I feel like I am back to being a player."

Park Sung-hyun will lead the active contingent. The 2017 LPGA co-Player of the Year and Rookie of the Year has seven career victories, including one in Arkansas last weekend that catapulted her back to the top spot in the rankings.

Former No. 1 Ariya Jutanugarn will also be here. The Thai star enjoyed a dominant 2018 season in which she won the Player of the Year award and the money title on the strength of three victories. Minjee Lee, an Australian golfer of Korean descent, and Lexi Thompson of the United States will be the two other active players.

In all, these eight players have combined for 29 LPGA majors. On the first day, players from different teams will pair up for foursome match play. On the second day, the four golfers on the Next Generation team will compete in a skins game, with the four legends providing on-field commentary.
(Yonhap)