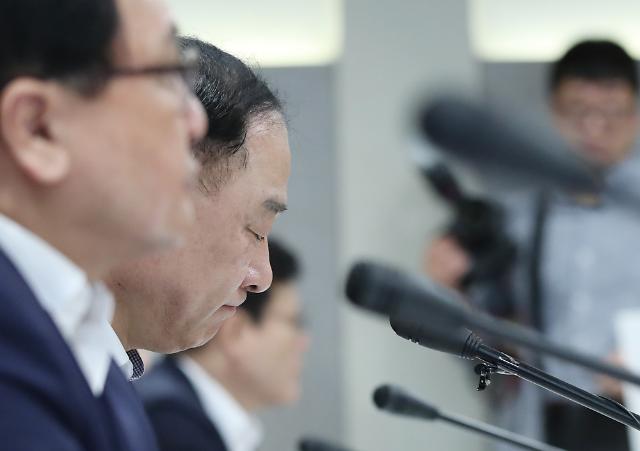 SEOUL -- South Korea's top economic official warned of stern measures under domestic and international laws as Japan shrugged off concerns about a price hike and a trade conflict to go ahead with restrictions on exports of high-tech chemicals used in the production of microchips and displays.

Strategy and Finance Minister Hong Nam-ki warned at a radio talk show on Thursday that "economic retaliation" would damage South Korean and Japanese industries together. "Retaliatory measures are in violation of international law and should be withdrawn. If implemented, it would damage not only the South Korean economy but also Japan."

South Korea threatened to file complaints with the World Trade Organization, but Japan enforced restrictions, forcing companies should apply for individual licenses. "They say it is because trust has been broken, but in fact, we clearly judge that it is economic retaliation against judicial judgment on forced labor," Hong said, adding South Korea would soon complete a working-level review to bring the case to the WTO.

"We will sternly respond by taking measures under domestic and international laws," Hong said, pointing to the WTO's time-consuming dispute resolution process. "It is important to minimize damage by communicating with related businesses. If retaliation leads to retaliation, it will be unfortunate for Japan, so I hope it will come to a good end."

Hong said South Korea should actively push for the localization of parts, materials and equipment that are highly dependent on foreign countries.

Samsung vowed to contribute to securing the competitiveness of South Korea's system semiconductor industry by supporting the development of next-generation high-tech products and expanding cooperation with foundry partners.