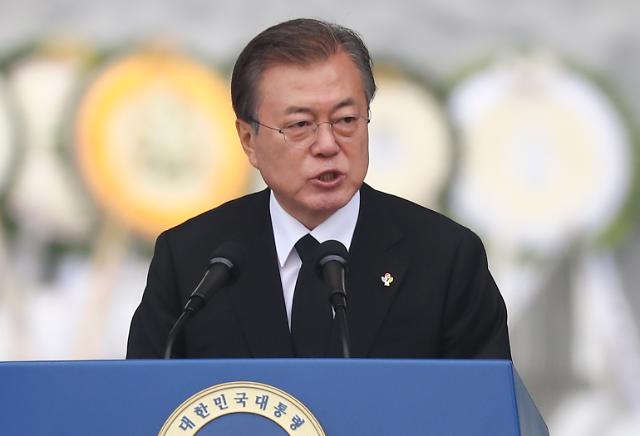 
SEOUL -- South Korean President Moon Jae-in warned of unspecified countermeasures, saying Japan's restrictions on exports of high-tech chemicals used in the production of microchips and displays could pose a threat to the world's "supply chain."

"In the case of actual damage to South Korean companies, our government will have to take a necessary response. I hope that will not happen," Moon told a meeting of top aides on Monday. It was his first official comment since Japan forced companies to apply for individual licenses.

Moon urged Japan to withdraw its measures and hold sincere discussion with South Korea. "A vicious cycle of responses and recriminations is not desirable to both countries." "Not only South Korea but the entire world is concerned about the move to restrict reciprocal private business transactions for political purposes."

Moon called for close cooperation between government officials and the business community to ride out "an unprecedented emergency situation" and suggested that public and private sectors should consider setting up an emergency response system together.

"What's important above all in an unprecedented emergency situation is close communication and cooperation between the government and the business community," Moon said, pledging efforts to seek a diplomatic solution calmly.

Choi Jong-ku, chairman of the Financial Services Commission (FSC), has said that Seoul should get ready for "every possible situation," although he ruled out any sudden outflow of Japanese funds. "Our government is also checking every possible situation because we do not know what further action Japan will take in the future."

"I don't know how likely it is, but I don't think we'll have much trouble coping with it even if it happens," the top financial regulator said. "Even if investments are withdrawn from bond and stock markets, they will not have a significant impact on markets as their size is not large."