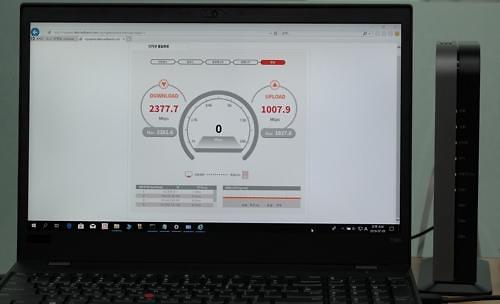 The video-on-demand internet protocol TV (IPTV) company said in a statement on Monday that it has developed a cable modem capable of supporting the internet speed of up to 2.5Gbps, which is about 2.5 times faster than that of the ordinary optical cable internet. The new modem exclusively supports a hybrid fiber-coaxial (HFC) network widely used in urban areas.

SK Broadband plans to commercialize the 2.5Gbps HFC technology in 2020 that would provide a seamless transfer of very large data such as ultra-high-definition video files through IPTV set-top boxes in the line with the era of 4K displays. Using SK Broadband's new technology, it would take less than 30 seconds to download a high-definition movie file sized about 4GB.

HFC networks have been commonly employed by IPTV service operators since the early 1990s. Data is transferred from main servers to local distribution facilities at each district via optical fiber cables to final destinations such as homes and offices through coaxial copper cables.

SK Broadband said it increased the modem's maximum bandwidth five times to 500Mpbs, reducing lag and latency even if multiple users are hooked onto a single coaxial copper cable network.