Senior diplomat says U.S. will do 'what it can' to help resolve Seoul-Tokyo row: Yonhap 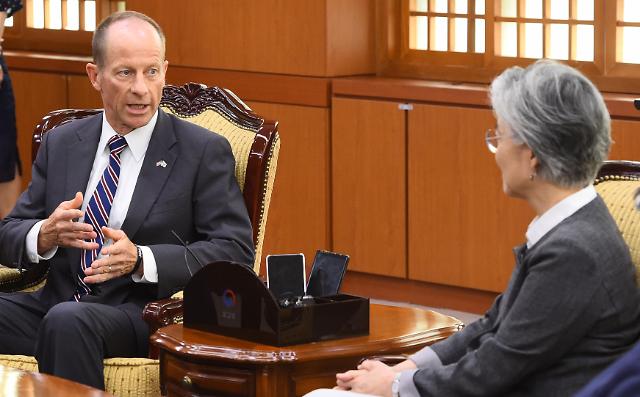 
SEOUL -- The United States will do "what it can" to help resolve an increasingly rancorous diplomatic spat between South Korea and Japan, a senior American diplomat said Wednesday.

"The U.S. places a great priority on strengthening relations between our country and our two close allies between the ROK and Japan. The truth is no significant issue can be resolved without cooperation between our two allies," he told reporters. ROK stands for South Korea's official name, Republic of Korea.

"So fundamentally, ROK and Japan must resolve this sensitive matter and we hope that resolution happens soon. The U.S. as close friends and allies to both will do what it can to support their efforts to resolve (the situation)," he added.

Stilwell arrived in Seoul on Tuesday for a three-day visit as part of his first Asia trip since taking office last month. His remarks came after a series of meetings with top Seoul officials, including Foreign Minister Kang Kyung-wha.

The already fraught ties between Seoul and Tokyo have been spiraling downward since Japan enforced tighter restrictions on July 4 on exports to South Korea of three key industrial materials used in semiconductors and displays. The friction has caused concern among U.S. policymakers that have long called for stronger trilateral security cooperation with South Korea and Japan to promote regional stability.

Seoul sees Tokyo's export control measure as a tit-for-tat move in response to court rulings that ordered Japanese firms to compensate Korean victims of forced labor. Tokyo argues that all reparation issues, stemming from its 1910-45 colonization of the peninsula, were settled under a 1965 treaty on normalizing bilateral ties.

"We discussed how we are going to turn our natural convergence between our Indo-Pacific strategy and the New Southern Strategy, which we discussed, and take advantage of the overlaps and opportunities they present," he said.

In the morning, Stilwell first met Kim Hyun-chong, deputy director of the presidential National Security Office, and then Seoul's top nuclear envoy, Lee Do-hoon, both at the foreign ministry. Later in the day, he met Deputy Foreign Minister for Political Affairs Yoon Soon-gu and paid a courtesy call on Minister Kang.

During the talks, South Korean officials were expected to call for the U.S. to play a more active role in defusing tensions between Seoul and Tokyo that flared up following Japan's July 4 measure to tighten restrictions on exports of three key industrial materials used in semiconductors and displays.

Kang voiced her expectation for Stilwell's role as "bridge and communication channels" between the allies. "I think you understand the issue, you understand the challenges ahead. ... We really look forward to working with you at various levels in this very challenging and difficult time," Kang said.

It certainly helps to have an interlocutor who can really play the role of a bridge and communication channels between the two sides," she added, referring to Stilwell's Korean language skills.
(Yonhap)