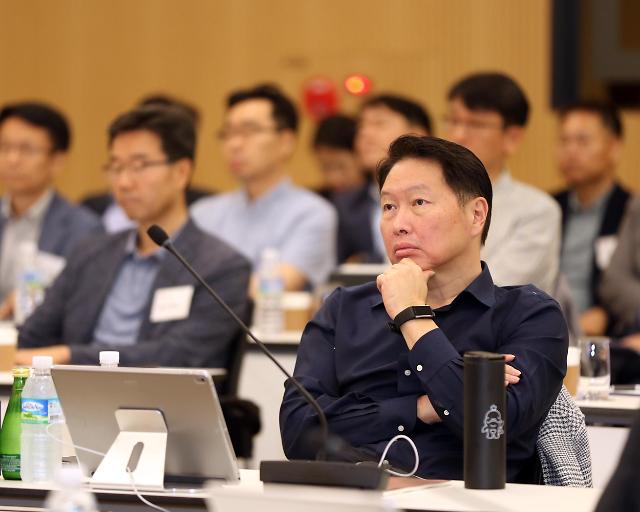 SEOUL -- SK Group chairman Chey Tae-won was locked in an indirect altercation with a senior economic official over whether home-made key materials used for microchip production are reliable and competitive enough to replace Japanese products.

The dispute erupted in a roundabout way at a business forum on the southern resort island of Jeju on Thursday when SMEs and Startups Minister Park Young-sun suggested in her speech that big companies should use core materials such as hydrogen fluoride produced by small domestic firms.

"Although the conflict with Japan is a crisis, I think it can be an opportunity as well," Park said. "We have to make core components in our country, and large companies cannot do it all," she said, asking major semiconductors companies like Samsung Electronics and SK hynix, an SK Group unit, to consider purchasing South Korean products.

"When I met small and medium-sized companies and asked them, they replied they could produce hydrogen fluoride...but big companies don't buy it," Park said, calling for cooperation and joint research between big and small companies. "In the end, all we need is the power of connection."

When asked by journalists to comment at the end of the forum in Jeju, Chey voiced skepticism over South Korean materials. "Of course, we can make it, but it's a matter of quality," he said, emphasizing the purity and quality of hydrogen fluoride, also known as etching gas.

"There should be hydrogen fluoride that fits the process, but we can't get that much detail inside of us," Chey said. Experts agree it takes a long time to catch up with the technology level of Japanese products.

Park hit back later in a social media post. "You must not expect too much at your first attempt," she said, adding the situation might have been far different if large and small companies teamed up for joint research and development 20 years ago.

"It's late, but we have to work together now to overcome the crisis. Everything needs time for accumulation. We must analyze and polish the causes of failure repeatedly by trial and error. What we need now is to give each other a chance and encourage each other," the minister said.

Since Japan strengthened regulations on exports of photoresists, fluorine polyimide and etching gas on July 4, President Moon Jae-in has urged South Korean firms to reduce their dependence on Japanese materials and step up localization.

Some South Korean firms also import core raw materials to produce etching gas, but Samsung and SK hynix are reluctant to use home-made materials due to a significant gap in quality with Japanese products. There have been widespread concerns that it would take a long time for South Korean companies to finding replacements in other countries.

South Korea relied on Japan for more than 90 percent of its supplies of photoresists and fluorine polyimide and for 44 percent of etching gas, according to the Korea International Trade Association.