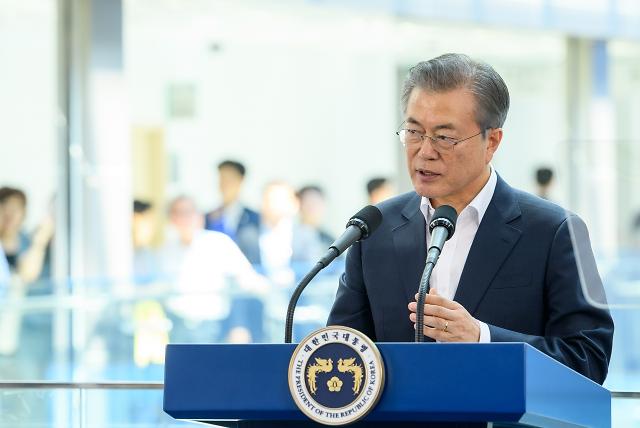 [Courtesy of the presidential security service]


SEOUL -- South Korea's labor ministry approved special overtime for up to three months at companies in research and development to localize key materials regulated by Japan as President Moon Jae-in emphasized a "can do" spirit to overcome Japan's technology hegemony.

Comparing the current situation to a social disaster, Employment and Labor Minister Lee Jae-kap said Monday that the government would grant an exception to South Korea's legal limit of working for 52 hours per week. Overtime of more than 12 hours per week is approved if intensive labor is inevitable to cope with a disastrous situation.

"To minimize possible damage to our companies due to Japan's export regulations, the government plans to mobilize all available resources to respond," Lee told reporters, adding extended work would be allowed at firms involved in research and development for localization and in conducting tests to procure alternative parts.

Extended work must last for up to three months, but Lee said it can be applied anew every three months "in case of an unavoidable situation" only on consent from workers. "If Japan expands export restrictions, the scope of approval for extended work will be expanded."

Since Japan strengthened regulations on exports of photoresists, fluorine polyimide and etching gas on July 4, Moon has urged South Korean firms to reduce their dependence on Japanese materials and step up localization.

Officials and business leaders have expressed concern about irrecoverable trade relations between Seoul and Tokyo if Japan takes additional measures, including the removal of South Korea from a so-called "white list" of trusted importers. Moon has warned of strong countermeasures.

At a meeting of top aides on Monday, Moon said South Korea should evoke a "can do" spirit again to catch up with Japan's technical superiority as it has done in home appliances, electronics, semiconductors and shipbuilding.

"We have come to realize once again that securing an industrial competitive advantage is essential to sustain equal and reciprocal trade in the international division system. We can do it," Moon was quoted as saying. "So far, we have overcome Japan's absolute superiority one by one in many industries such as home appliances, electronics, semiconductors and shipbuilding."

"In a situation where technological hegemony that undermines free trade order threatens our economy, innovative start-ups of new technologies can be an important solution," the president said, calling for "bold innovation" in parts and materials industries.