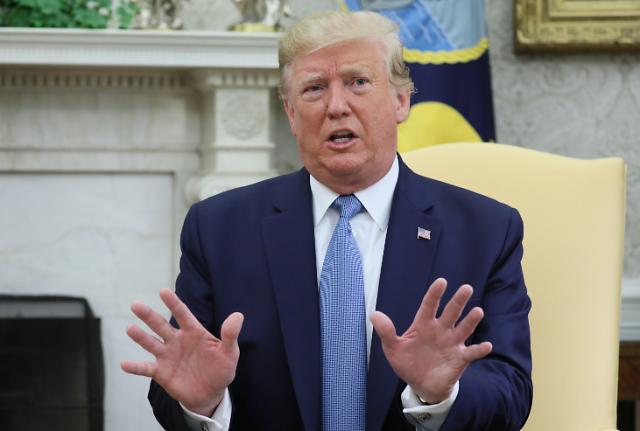 WASHINGTON -- U.S. President Donald Trump said that North Korea hasn't tested missiles other than "smaller ones," in an apparent attempt to keep dialogue with the North alive despite its recent test-firing of short-range ballistic missiles.

Trump made the remark in an interview with Fox News a day after the North fired two short-range ballistic missiles, insisting that he gets along "very well" with North Korean leader Kim Jong-un. "They haven't done nuclear testing. They really haven't tested missiles other than, you know, smaller ones, which is something that lots test," he said in his first public remarks on the launches.

The provocation followed Trump's impromptu meeting with Kim at the inter-Korean border on June 30, during which the two agreed to restart working-level talks on dismantling the North's nuclear weapons program. The last time North Korea launched short-range missiles in May, Trump also downplayed them in an apparent effort to salvage the diplomatic process.

For Trump, his engagement with North Korea, and its suspension of nuclear and long-range missile tests, has been one of his major foreign policy achievements ahead of his 2020 reelection bid. Still, Trump appeared to warn the North against making further provocations.

"I think with North Korea, we've been doing very well, but that doesn't mean that's going to continue," he said in the interview. "We'll see what happens, but I think what you said might be somewhat of an understatement," he said, referring to the interviewer's comments that he believes the U.S. military will respond strongly if pushed by either North Korea or Iran.
(Yonhap)